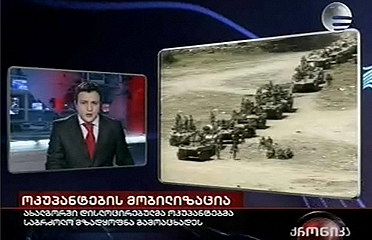 A 30-minute long fake report by Imedi television station on Saturday evening as if Russian troops were advancing to Tbilisi triggered panic and also wave of anger on the television station, which has a nationwide broadcasting.

In a brief notice to viewers before the launch of the report, the television station told viewers it was "a simulation" of what might happen in case Russian plans materialize. But in the course of the report itself the TV station carried no sign on the screen indicating that the report was fake.

"Have you ever thought about the end of the Georgian statehood? Probably yes, because we have already seen this threat in summer, 2008," an anchor of Special Report, Natia Koberidze, said while opening the program.

She then continued: "Russia’s tactic against Georgia becomes more and more dangerous. The occupying force is vigorously searching for and is finding a foothold within the Georgian political spectrum."

"We want to offer you a simulated, special bulletin of Kronika. Our viewers and invited guest [in Special Report program’s studio] will see a news bulletin of probably the toughest day for Georgia, which take into view those threats which politicians and experts are discussing regularly; [a news bulletin about] how events may develop if the society is not consolidated against Russia’s plans. Let’s see the news bulletin about the worst future."

After these introductory remarks by the anchor, a regular 8pm news bulletin of Imedi TV, Kronika, started. The story line of the fake report focuses on post-local election period, sometime in early June, 2010; opposition, allegedly led by Nino Burjanadze and Zurab Nogaideli – the two politicians who have recently met with Russia’s PM Vladimir Putin, protests against the local election results; Russia uses unrests in Georgia and intervenes militarily. The fake report culminated with announcement about President Saakashvili’s "assassination" and "clashes" in outskirt of Tbilisi.

A regular anchor of 8pm Kronika, Lasha Kharazishvili, opened the news bulletin with announcing that President Saakashvili would make a special statement about "the current situation in Georgia."

Then he continued: "As it was reported few minutes ago, the Russian military forces, including its tank battalion, deployed in Akhalgori [breakaway South Ossetia], declared combat readiness; it is not ruled out that they will marched towards the capital [Tbilisi]. This information caused panic in Gori, Tbilisi and other Georgian cities; residents are trying to flee Tbilisi causing traffic jams and queues at petrol stations… sabotage on strategic facilities is not ruled out."

A caption was running bellow the screen, saying: "Mobilization of the occupying forces; Akhalgori-based military unit on combat readiness."

Then a new story line came into the fake report with the news bulletin anchor announcing that "nine persons wounded as a result of unrests in Tbilisi still remain in hospital" and that four people were "killed" in those unrests.

"Unrests in Tbilisi started on June 7 after unknown persons opened fire on protesters gathered in the Tbilisi center to protest against the election results," the anchor announced.

Mentioning of "June 7" was among those few vague clues which the fake report contained indicating that it was not true, but not definitely enough, as the report was developing in such a way that it was becoming more misleading and many viewers, especially those who started watching it not from its very start, thought it was all true.

Then back in studio, the news bulletin anchor announced that the opposition parties made a joint statement "declaring the authorities as illegal and announcing about establishment of so called people’s government." It was again followed by a separate fake report on details of "opposition’s statement" with use of archive footage from one of the meeting of opposition leaders.

Back in the studio the anchor again repeated, about seven minutes after the launch of the news bulletin, the initial announcement that Akhalgori-based Russian military forces were on high alert and their advance towards Tbilisi was not ruled out. The anchor also added that "the Georgian troops are mobilized at the administrative border close to Akhalgori and in Ergneti village."

Then the anchor made an introduction to a new story line to the fake report, involving "life attempt" on leader of breakaway South Ossetia Eduard Kokoity. The anchor announced that Nino Burjanadze, leader of Democratic Movement-United Georgia party and ex-PM Zurab Nogaideli, leader of Movement for Fair Georgia, "arrived in Tskhinvali" and "along with the Russian authorities, they also blamed the Georgian authorities for organizing attack on Kokoity." The announcement was followed with a report with archive footage of Tskhinvali and a journalist voiceover telling a fake story about the details of "attack on Kokoity."

After that the anchor in the studio announced that the Russian President Dmitry Medvedev summoned a national security council. A video footage of Medvedev followed accompanied with a voiceover Georgian translation as if Medvedev was saying that he was ordering his government "to neutralize threat coming from Saakashvili." The newscaster also announced that Russian troops based in Armenia, "have crossed the Georgian border and are heading towards Tbilisi."

The White House was also included in the fake report with the anchor announcing that President Obama "is just making a statement; here is a live footage" from Washington – again an archive footage was showed, although with caption "live" showing President Obama with Vice President Biden standing next to him; a voiceover Georgian translation gave a false quote of the U.S. President as if saying that he calls Russia "to stop military campaign" against Georgia. After that anchor also announced that Secretary of State Clinton was "on her way to Moscow."

The anchor then announced that "few minutes ago Russia conducted air strikes on Tbilisi airport… on Senaki and Gori military bases."

It was followed by "a sensational information", as the anchor put it, about "assassination of President Saakashvili." "We are not yet able to confirm this report disseminated by Nogaideli’s party," the anchor said; he then added that the President’s administration released a statement saying "Saakashvili is in a safe location".

The fake report was then followed by announcement that "clashes are taking place in Mtskheta", just outside Tbilisi.

After the end of this 30-minute fake story, the Special Report program continued from its studio.

"For those who have just joined us, I want to say that these were not real chronicles of today; these were possible events that may take place in early June… Kronika has offered you to imagine what should not happen," anchor of Special Report, Natia Koberidze, said.

Then the program continued in studio with large group of invited guest discussing Russia-Georgia relations and potential security threats. Only few participants of the program spoke out against the fact that the Imedi TV did not run a caption saying that the report was fake. 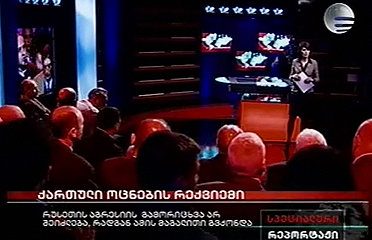 In the course of the program the anchor had to repeat for several times that it was "a simulation", as many viewers were phoning to the television station complaining that the TV report caused panic. Growing protest against the fake report and signs of panic prompted the President’s administration to intervene.

"There should have been a caption on the screen showing that it was simulation," she said.

Manjgaladze, herself a former anchor of Imedi TV news bulletin, said she believed the television station should apologize.

"Theoretically such things, which were shown today might be possible, but there is no real threat of that," she said.

After the program was over, the Imedi TV continuously was running a caption below the screen apologizing for the fake report.

"It aimed at obstructing Russia’s aggressive plans," the caption reads.

The program was not yet over as several Facebook campaign groups emerged condemning Imedi TV. In few hours one such group attracted over 2,000 supporters and another one over 2,800. There have also been calls for a collective lawsuit against Imedi TV for misleading viewers and causing widespread alarm.

Dozens of angry people, including some opposition politicians gathered at a spontaneous rally outside the Imedi television station. Some protesters were lashing out at some of the program guests, criticizing them for not speaking out against the fake report while participating in the discussion in studio after the report was aired.