The detention was reported by one of the founder of the Shame Movement, Shota Digmelashvili, who said on his Facebook page that police arrested the two activists when they were trying to hang banners on a bridge.

Digmelashvili said friends and family of the detainees had looked for them for hours, only to find out the two had been taken to Samtredia town for administrative detention.

Eliso Datusani, the defense lawyer of the detained activists, told reporters that she has not familiarized herself with case materials yet and she does not know what exact charges have been brought against the activists.

She claimed that police detained the activities in “an abandoned building” in downtown Kutaisi, before they could hang the banner.

The trial for the detainees was supposed to be held on November 5, but reports emerged on social media claiming the hearing had not been set and the two activists remained in detention.

Civil.ge tried to reach out to the Interior Ministry to clarify the details. The latter noted without specifying the article that both activists were detained on administrative offenses.

The civil society organizations have slammed the detention of Shame Movement’s activists as alarming and an attempt “to intimidate” the public.

“The state is afraid of protest that may cause a wave [of resistance],” Giga Makarashvili of Shame Movement told reporters.

Akaki Saghinadze of local CSO, Regional Empowerment for Democracy, called on the government to refrain from “persecuting patriot people,” adding that the purpose of detaining activists was “to strengthen fears” among citizens. 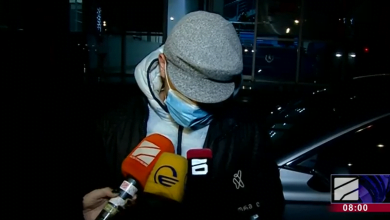