Davit Dvali and Jarji Akimidze, co-founders of Rustavi 2 TV and the channel’s co-owners in 1994-2004, said on August 1 that they would not accept 40% of shares in Georgia’s most-watched television broadcaster offered by Kibar Khalvashi, who recently became the 100% shareholder of the TV company.

Speaking about the reasons of their refusal at a news briefing yesterday, Dvali and Akimidze noted that the TV channel was illegally seized by the United National Movement (UNM) in 2004, but the Georgian Dream government, which came to power in 2012, hampered the investigation launched seven years ago and “the case still remains shelved.”

They also claimed that “absurd accusations” are being made against them and that the government has intensified its efforts to confront them through government trolls and bots.

Dvali and Akimidze said that they would not participate in transforming Rustavi 2 into a state-owned TV channel, adding that their goal is to restore their seized rights by legal means. They warned the government that it will have to bring the investigation launched in 2012 to the end and return the TV channel to its owners.

“We will continue our fair struggle so that Rustavi 2 returns the major position of the fourth estate, flagship of free media that is so vitally important for the country’s democratic development,” the two men noted.

Commenting on the co-founders’ refusal, Paata Salia, the TV channel’s newly appointed director general, said that Kibar Khalvashi’s offer was an expression of goodwill rather than an obligation and that both Dvali and Akimidze shared this position.

Kibar Khalvashi, new owner of Rustavi 2 TV, met with the TV channel’s co-founders, Davit Dvali and Jarji Akimidze on July 30 and offered them 40% of the broadcaster’s shares.

It is worth noting that earlier Khalvashi promised 50% of shares to the co-founders as well as appointment of Davit Dvali as the director general in case of positive resolution of the dispute.

In its judgement of July 18, the seven-member Chamber of the European Court of Human Rights (ECHR) declared there has been no breach in fair trial guarantees in Rustavi 2 ownership dispute. The Court also ruled “to discontinue” suspension of the enforcement of the Supreme Court’s decision of March 2017, which granted the ownership rights of Rustavi 2 TV, to Kibar Khalvashi.

Khalvashi applied to the National Public Registry (NAPR) shortly after the ECHR decision and was registered as the new owner of Rustavi 2 TV on the same day. He also appointed his defense lawyer, Paata Salia, as the new director general, replacing Nika Gvaramia. 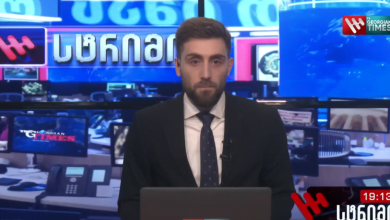