On March 7, the former president of the National Bank of Georgia  (2009-2016) Giorgi Kadagidze was interviewed by the prosecution at the Tbilisi City Court in connection with TBC Bank case inquiry.

The current investigation into TBC Bank concerns a 2008 transaction – which prosecution suspects might violate the money laundering regulations. It falls within the period when Kadagidze was supervising the Financial Monitoring Agency.

Exiting the court building, Kadagidze told the reporters that only two questions were asked – concerning the functions of the Financial Monitoring Agency at the time, as well as the specific inspection of TBC Bank by this Agency on 2 September 2008. He said “no specific conversation concerning the problematic transaction took place”.

“Today’s interview has shown that there are no problems with the regulating authorities. The key questions concerned the functions and responsibilities of the Financial Oversight …and concrete actions that concerns a very difficult period for our country [Russo-Georgian war in August 2008], as well as a specific inspection, which has no link with the problematic transaction [that prosecutors are investigating],” Kadagidze told the journalists.

He added that he “rules out” the possibility of inspectors “having missed” anything withing the purview of their mandate. “As a former President of the Financial Monitoring Agency I can say, that if there is additional, very substantial proof presented by the prosecution, the elements of money laundering are extremely difficult to demonstrate in this transaction,” Kadagidze added.  He stressed, that given the particular sensitivity of the case, all sides shall guarantee maximum transparency.

Archil Tkeshelashvili, representing the state in this case, also made a comment for the press. 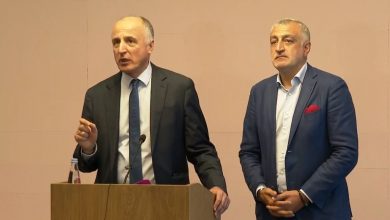