Nazibrola Janezashvili and Anna Dolidze, non-judge members of the High Council of Justice (HCoJ) – the 15-member body overseeing the judiciary – sent individual letters to 278 judges working in Georgia, seeking their support for fair and independent judiciary in the country.“

“Today, our justice stands at a very important juncture – either it will be independent, fair and serve the democratic, rule-of-law-based state, or it will serve the interests of one concrete group,” Anna Dolidze said. In the letter unveiled at a news briefing on January 23, the two non-judge members of HCoJ claimed that their goal is to fight against unlawful influences exerted on courts.

“Our goal is to eradicate extermal influence on the courts, to promote and strengthen honest and professionally strong judges. Each honest and competent judge is valuable for us. Your choice is decisive at this juncture. Your steps taken in support of fair and independent court, expressed in any form, will significantly strengthen this aspiration,” the letter reads.

Janezashvili said that the conference of judges will be held on January 26, where the developments around the courts and the High Council of Justice will be discussed. Dolidze and Janezashvili called on the judges “to protect state and public interests and to keep in mind that the country needs an independent and simultaneously accountable court.”

She also noted that the letters were not sent to judge members of HCoJ, as well as to those ten judges, who were nominated as candidates of the Supreme Court judges.

According to the letter, HCoJ’s decision to nominate 10 judges as candidates for the Supreme Court “has clearly demonstrated the problems faced by the judicial authorities,” because their candidacies were selected without deliberating on other judicial candidates.

Dispute over the Supreme Court nominations in the ruling Georgian Dream–Democratic Georgia started in late December, when the HCoJ submitted a ten-member list of nominees to the Parliament, triggering the resignation of Eka Beselia, chairwoman of the Legal Affairs Committee.

MP Eka Beselia claims the party’s parliamentary leadership, including Speaker Irakli Kobakhidze, was lobbying the controversial nominees, which she argues include some who “served Mikheil Saakashvili’s oppressive regime.”

Janezashvili and Dolidze have also submitted the legislative proposal on judicial appointments to the Parliament of Georgia on January 15. 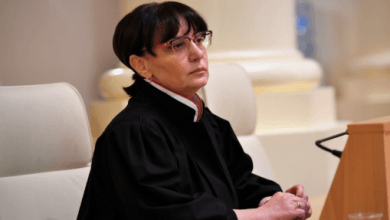