“For Georgia to succeed on the path to reform, is the ultimate and most important way to beat Vladimir Putin,” Wess Mitchell, the U.S. Assistant Secretary of State for European and Eurasian Affairs, said today at the Tbilisi International Conference “World in 2018: Upside Down?” co-hosted by the the McCain Institute for International Leadership at Arizona State University and the Economic Policy Research Center (EPRC).

Mitchell, who is on the second visit to Georgia on September 11-12, as part of his diplomatic tour to Europe, also underscored that Georgia’s success “as a model democracy, as a westward facing strategic partner and also a reliable transit country in energy is absolutely crucial for disproving” the Russian President’s thesis that “western democracy would fail in the countries that border Russia.”

The U.S. Assistant Secretary said today U.S.-Georgia cooperation is “stronger than it has ever been,” and that Georgia is “an important symbol of freedom and western values.” He also stressed that U.S. has been “very important instrumental part of Georgia’s commitment to the western world,” including through more than USD 32 billion assistance in last 25 years. “And I think we have seen a very good return of that investment with Georgia strategically, as well as politically and economically,” Mitchell underscored.

Urging that Georgia will be in NATO in future, Mitchell stressed the country has long been the part of the West. “Georgia is western by choice. Georgian people have repeatedly chosen a western future for themselves, a future of democracy, of European integration, and membership in NATO,” the Assistant Secretary of State emphasized, noting that the country is also “profoundly and deeply western” geographically, historically and culturally.

Mitchell also hailed U.S.-Georgia cooperation in the field of defense and security, including through the Georgia Defense Readiness Program, Resolute Support Mission, as well as Noble Partner and Agile Spirit military exercises, and reiterated that U.S. would “remain committed to seeing Georgia into NATO.” He said the NATO and U.S.-led exercises in Georgia “are demonstration of U.S. willingness to engage with Georgia as a NATO aspirant.”

“But I think beyond the bilateral level, this together with weapons and training we provide, demonstrate very clearly that United States will commit the resources and the attention to supporting Georgia and to making sure that it is able to defend its territories,” Mitchell said emphasizing that territorial integrity, sovereignty and independence of Georgia “have been and remain at the heart of U.S. strategic objectives in the Caucasus.”

Wess Mitchell also said the Russo-Georgia war in August 2008 has demonstrated that Russian Federation had both the capabilities and the intention to systematically undermine the western security and political order,” and that “in retrospective, it is regrettable that we did not wake up after the [Russo-]Georgia war.”

The Tbilisi International Conference is a two-day event co-hosted by the McCain Institute for International Leadership at Arizona State University and the Economic Policy Research Center (EPRC).

As part of his visit to Tbilisi, Wess Mitchell also met with Georgian leaders, including President Giorgi Margvelashvili and Prime Minister Mamuka Bakhtadze. He has also scheduled to meet with other political leaders and civil society representatives to discuss U.S.-Georgian cooperation on a range of global issues.

This is Mitchell’s second visit to Georgia since his appointment as the Assistant Secretary of State in October 2017. He first traveled to Georgia on April 29-30. 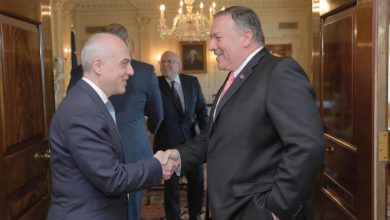