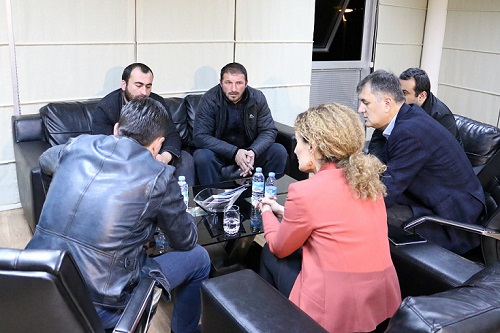 
Two Georgian citizens, Levan Kutashvili and Ioseb Pavliashvili, who were apprehended by the Russian-backed Tskhinvali authorities at the same time as Archil Tatunashvili, have managed to return to Georgia proper.

Kutashvili and Pavliashvili, who were released from Tskhinvali custody shortly after their detention, were put under police supervision in their parental homes in the Russian-occupied Akhalgori Municipality, and had been unable to cross to the Tbilisi-administered territory.

IDP Minister Sozar Subari and Reconciliation Minister Ketevan Tsikhelashvili, who met with Kutashvili and Pavliashvili together with other government officials, said the two men had been “released,” and had “no health-related problems.”

The ministers refrained from providing further details on their detention, as well as on the death of Archil Tatunashvili.

Deputy Interior Minister Kakhaber Sabanadze confirmed that the two men “had no signs of being tortured,” and added they were in the police department building in Mtskheta, apparently for questioning over the ongoing investigation into Archil Tatunashvili’s death.

The body of Archil Tatunashvili, a thirty-five-year old Georgian citizen, who died at the hands of the Russian-backed Tskhinvali authorities on February 22, has not been transferred to his family despite Tbilisi’s request and international mediation.

Akhalgori Municipality, the territory of which was almost entirely under the jurisdiction of the central government before the Russo-Georgian War of 2008, is home to 4209 persons (roughly half of the pre-war population), according to the region’s Russian-backed authorities. 2337 (55.5%) of the total population are ethnic Georgians.