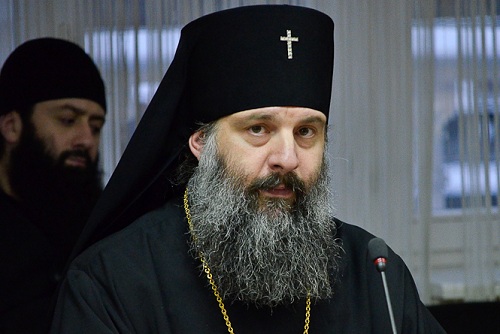 During his St. George’s Day sermon on November 23, Georgian Orthodox Patriarch Ilia II named Metropolitan Shio Mujiri of the Eparchy of Senaki and Chkhorotsku as the Patriarchal locum tenens.

According to the statute of the Georgian Orthodox Church, the locum tenens will temporary govern the Church after the Patriarchal throne becomes vacant, as well as organize the process of election of a new Patriarch.

“Today is a historical day. St. George wanted me to have a locum tenens, and that is Metropolitan Shio. I congratulate him on this high rank and hope that he will fulfil our expectations,” said Patriarch Ilia II as he addressed the parish and clergy at the Kashueti Church in Tbilisi.

Metropolitan Shio Mujiri told reporters that the Patriarch’s decision came as “a complete surprise” to him. “On the one hand, it is a huge joy that His Holiness honored me to take this position. On the other, I am feeling very uneasy because it is a huge cross to bear,” he said.

Shio Mujiri, 48, is a member of the Holy Synod, the Georgian Orthodox Church’s main governing body. In 2003, he was appointed the Bishop of Senaki and Chkhorotsku Eparchy. Earlier, he led the Georgian parish of the St. George Church in Moscow. Simultaneously, he studied at Saint Tikhon Orthodox University in Moscow. In 2015, he was awarded PHD in divinity.

As locum tenens, no later than two months after the Patriarchal throne becomes vacant, Shio Mujiri will have to convene an extended council of the Georgian Orthodox Church to elect a new Patriarch. Before that, the locum tenens will convene a meeting of the Holy Synod, where three Patriarchal candidates will be selected. A candidate who garners more than a half of the votes, will be elected as the new Patriarch.

The Georgian Patriarch’s decision comes few months after the so called “cyanide case,” and amid the internal disagreements in the Church that followed the case.

The Patriarch could have named his locum tenens in his will, which would have been opened after his death in the presence of the majority of the Synod members, but Ilia II decided to do it during his lifetime and drafted the decree himself, which was widely perceived as the Patriarch’s endorsement of Metropolitan Shio’s candidacy.

The 40th anniversary of the 84-year-old Georgian Patriarch’s enthronement will be marked on December 25, 2017.