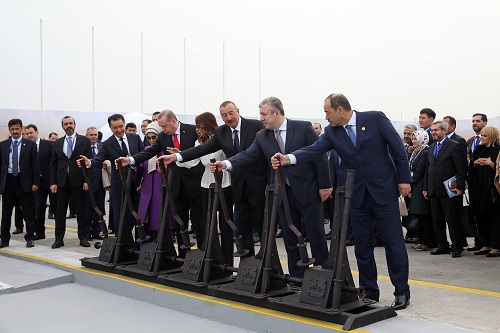 The leaders of Azerbaijan, Georgia and Turkey inaugurated yesterday the Baku-Tbilisi-Kars (BTK) 850-kilometer railway route connecting the Azerbaijani capital with the northeastern Turkish city of Kars via Georgia.

Attending the opening ceremony at the Baku International Sea Port, Prime Minister of Georgia and Presidents of Azerbaijan and Turkey hailed the Baku-Tbilisi-Kars railway project and noted its importance for the region in the context of the new Silk Road.

In his remarks, Prime Minister Giorgi Kvirikashvili said that “a new Eurasian bridge” was being established, telling other attending leaders that “the geostrategic position of our countries gives us the unique opportunity to be a connecting bridge between Europe and Asia,” and expressing confidence that “the new railroad line will considerably alter the existing economic reality and create totally new conditions for development.”

Kvirikashvili stressed that the progress of each participating country “is the basis for development, stability and security of the others,” saying that “today we are connecting not only our economies and trade potentials, but the greatest markets of the world.”

The Georgian Prime Minister also noted that future success of the new railroad route would be promoted by the growing trade and economic ties with China, expressing satisfaction with the fact that “on the China-EU trade and transportation map this route is taking the role of the “middle corridor”, as it was recently called by President Erdogan at the Belt and Road summit in China.”

Giorgi Kvirikashvili said that attendance of the Kazakh and Uzbek Prime Ministers, as well as members of the Turkmen and Tajik governments, pointed at the “particular importance of this project.”

Kvirikashvili reminded the audience about the upcoming international Belt and Road forum scheduled in Tbilisi for November 28-29.

Azerbaijani President Ilham Aliyev hailed the Baku-Tbilisi-Kars railroad as “a historic project of strategic importance,” that would become “an important part of Eurasia transportation map.” Aliyev said that successful operation of the route would “increase geopolitical importance of our countries and open up new opportunities for us.”

President Recep Tayyip Erdogan of Turkey called the new route “one of the links of the new Silk Road venture, initiated with the goal of connecting Asia, Europe and Africa,” adding that “we thereby announce the establishment of an uninterrupted railway line from London to China.”

The Turkish President stressed that “we live in a highly strategic geography that lies at the heart of the world,” and that “as the ancient nations of the region, we can implement much bigger projects so long as we act in solidarity and cooperation.”

The launch of the Baku-Tbilisi-Kars railway construction was announced in late 2007. At the time, 2010 was set as the completion date, but it has been delayed for many times since then with deadlines moving to 2012, then to 2013, 2015, 2016 and 2017. The reasons, cited at various times by various officials in Azerbaijan, Georgia and Turkey, varied from delays in funding and the change of government in Georgia to problems with a contractor company in Turkey, complex mountainous terrain and climate conditions.