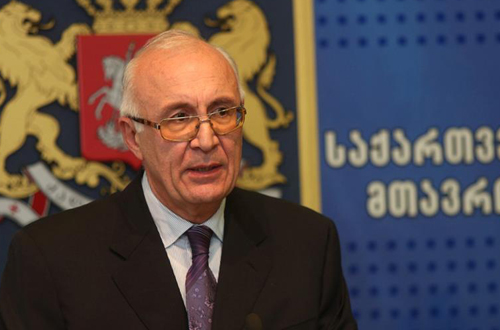 Georgian PM’s special representative for relations with Russia, Zurab Abashidze, said on Monday he would meet “informally” a senior Russian diplomat in Europe to agree on modalities of launching “new channel of communication” between the two countries, which have their diplomatic relations cut since the August, 2008 war.

Abashidze was using tentative language, mentioning frequently “probably”, including in respect of possible venue of the meeting and his potential interlocutor from the Russian side.

Abashidze told journalists on December 10 that the meeting might take place in Switzerland, which currently acts as a mediator between Russia and Georgia.

He also said that no mediators were involved in arranging the planned meeting.

Abashidze said that Russia’s Deputy Foreign Minister Grigory Karasin might be his interlocutor at the planned “informal meeting”.

Abashidze said it would be “one-on-one informal meeting.”

Karasin is Russian chief negotiator in the Geneva talks, which were launched after the August war and also includes negotiators from Georgia and the U.S., as well as representatives from Tskhinvali and Sokhumi.

The next, twenty second round of these talks are scheduled for December 12 in Geneva.

Karasin told RIA Novosti news agency on December 10: “I also do not rule out that the meeting will take place this week… We will be glad to have a conversation with him in his capacity [of Georgian PM’s special envoy].”

Abashidze said he would not be a member of the Georgian delegation in the Geneva talks.

He, however, reiterated that Geneva talks should be maintained as a separate format in parallel to “new channel of communication”.

Abashidze said that his upcoming “one-on-one informal meeting” with a Russian diplomat would be “more of a technical nature” to exchange views and to agree on arrangement of further possible meetings and their format.

If an agreement is reached in principle about launching of “new channel of communication”, it will also require an agreement on “numerous technical” aspects, Abashidze said.

“So far we do not even have an agreement to launch this format, but the fact in itself that this first meeting will take place, shows that the Russian side accepted our initiative with interest,” Abashidze said.

Russia’s Foreign Minister Sergey Lavrov said on December 9 there would be “contacts” with Georgian PM’s Special Representative for Relations with Russia “in the nearest future” in an attempt to, as he put it, “clarify context” in which Tbilisi tries to normalize ties with Moscow.

Abashidze said that Moscow had questions about how Tbilisi “sees this dialogue.”

“We’ve heard such questions from the Russian side; we have our answers. This first meeting will probably be more of a technical nature to discuss organizational issues of how to proceed with this possible dialogue in this future. We have our vision and we will inform [the Russian side] about it and then we will see whether this vision is acceptable for the Russian side or not,” Abashidze said.

He also said that this dialogue should start without preconditions.

On November 1, one week after taking PM’s office, Bidzina Ivanishvili appointed Zurab Abashidze, who was Georgia’s ambassador in Moscow in 2000-2004, as his special representative for relations with Russia.

“They [the Russian authorities] have their red lines which they do not intend to cross and they have said that they would not retract recognition of Abkhazia and South Ossetia. We also have our red lines," said Abashidze on November 1, adding that those ‘red lines’ where Georgia’s territorial integrity and its freedom to choose alliances in terms of Euro-Atlantic integration.

“But before approaching these red lines, our position is that there are other problems where we may find common ground – these are trade, cultural and humanitarian issues,” Georgian PM’s special representative said on November 1.

Abashidze told journalists on December 10, that the Georgian side was welcoming Lavrov’s remarks about Moscow’s readiness to discuss issues related to resuming trade relations with Georgia. Russia banned import of Georgian wines and mineral waters in 2006.