I spent my Sunday evening re-watching Mimino, an iconic Georgian comedy of 1977, making it perhaps the tenth time I have seen it in my not-so-long lifetime. This time, my reasons were much more sentimental. A lead actor who could be objectively credited with much of the film’s enduring success, Vakhtang Kikabidze, known publicly by his moniker of “Buba,” died on January 15 in a Tbilisi hospital, aged 84. This was my way of honoring him and his artistic and personal legacy. After all, Mimino defined for decades who “Georgian” was in the Soviet cultural space. His dress code, his easygoing way of being, his explosive temper, artistic flare, and underlying inner nostalgia became stereotypical.

Yet, the man behind the icon was much more complex.

Born in Tbilisi, in 1938, into a family of Georgian intellectuals, Konstantine Kikabidze and Manana Bagrationi, Kikabidze began his artistic career as a singer in the late 1950s, quickly rising to prominence as a talented musician, first as a member of iconic Tbilisi bands and then as a solo singer. By the 1970ies, Kikabidze combined his singing career with acting, successfully starring in several Georgian movies. He was soon noticed in Moscow and made his mark there too.

Kikabidze was exceptional both on the scene and on the stage: he was spontaneous where usual Soviet fare was wooden, he was unabashedly individualistic where conformity was encouraged, and he was gifted as a drummer, a dancer, and a singer. He was not one of the dreamy or angry dissident singers, but he normalized being different. It was his trailblazing performances: his raspy vocals, clenched smile, and unusual demeanor, that won the hearts of millions of viewers, making him one of the most famous Georgian singers and actors of all time. Beyond the borders of the Georgian Soviet Socialist Republic, Buba was THE Georgian. He was Mimino.

Filmed by Giorgi Danelia, a famous Georgian filmmaker, the movie has a classic yet compelling homecoming plot. It tells a story of a young helicopter pilot serving flights between remote villages in Soviet Georgia. Encouraged by his Russian friend and having fallen for the Russian flight attendant, he decides to try his fortunes in “big aviation” and heads to Moscow.

Hapless provincial goes through unexpected adventures, is mocked by his love interest, forges an unexpected friendship with an Armenian truck driver, gets arrested for defending family honor, and ends up penniless. But thanks to the kindness of (Russian) strangers, he succeeds and lands his dream job as a pilot of the iconic Soviet “Concorde” – Tu-144. But his heart is not in it anymore. Having traveled the West but consumed by nostalgia, Mimino returns home to a more natural habitat.

It could have been a propagandist disaster or a banal failure. But Danelia’s mastery of cinematography, his naturally warm irony, and his humor – at times naïve, at times cheeky – combined with the breathtaking imagery of the Caucasus mountains endeared the audiences. Kikabidze shone in the lead role. The film was an instant success in the Soviet Union. And so it was in Georgia.

Georgians – young and old – flocked to movie theatres and workers’ clubs to catch a glimpse. The next generation of Georgian men made Mimino almost a national identity marker in the USSR, endlessly reciting its catchphrases and accepting (at times, even amplifying) the now-stereotypical Mimino-like image of Georgia and Georgians.

Truth be told, I always had mixed feelings about the movie. Born just over a year before Georgia would regain its independence and start progressively cutting its ties to everything and everyone Soviet, I felt a certain unease. The stereotypical image of a hillbilly macho yet sentimental Georgian, endless jokes (although masterfully executed) about Georgian-Armenian disputes, and the galore of benevolent Russians in the imperial capital were hardly relatable. It left an unpleasant aftertaste every time I returned to the movie. But while I felt this unease, Mimino always fascinated me with the brilliant artistry of the cast, particularly of Kikabidze.

In Georgia, Kikabidze was much more than Mimino and much more than a showman. He represented a generation of highly talented Georgian artists who began their careers in the 1960 and 1970s and returned (albeit only minimally) the long-lost tradition of artistic freedom and innovation to Georgia, leaving a lasting imprint on its modern cultural identity. He was also a man who cut across time. Kikabidze’s monophonic, bard-like performances, coupled with his urbanite vernacular, captured the echoes of pre-Soviet Tbilisi – of a multicultural town on the crossroad of civilizations with a clear identity of its own.

Kikabidze was inseparable from Soviet cinema; he was idolized in Moscow. And yet he was also not a stranger to Georgian nationalist politics. In the late 1980s, he openly supported the pro-independence movement, criticizing the deadly Soviet crackdown of April 9, 1989, which killed 21 young peaceful protesters. His political activism was not without stains: Kikabidze’s decision to endorse the coup d’état of January 1992 that ousted the legitimately elected government remains – to this day – the most controversial page in his career.

He lived and worked in Moscow for a protracted period afterward. He was giving concerts and reaping the benefits of being one of the faces of Russia’s post-Soviet nostalgia.

But in 2008, in the wake of the Russian invasion of Georgia, he truly rose to the occasion and vindicated his prior missteps. Kikabidze broke off all his ties with Russia after 2008. He gave back the state decorations, refused to perform in Russia, and, just like his character in Mimino, returned home – to Georgia.

With that, he made it loud and clear that politics and culture are inseparable and that singing for the occupier is wrong at best and immoral at worst. It was at this very moment that I discovered him as a citizen, a man of extraordinary courage and moral integrity who put the interests of his homeland above his career.

His real-life homecoming, however, did not come easy for the performer; his concerts in Russia were over, and he was scolded by his Russian friends and vilified by the Kremlin authorities. But the man withstood, staying true to his values until the very end.

In recent years, Kikabidze emerged as a vocal supporter of Ukraine, telling the Russians – in their own language and his familiar, soft-spoken manner – that their leader is committing a grave crime against neighboring countries. Kikabidze remained active in domestic politics, too – standing up for what he believed to be correct and speaking against the ills of the one-man rule.

With him goes one piece of that puzzling paradox of late-Soviet Georgia. Was its vibrant cultural revival just a cover for the Western songs, many of which Kikabidze sang so brilliantly as a young man? Was it a provincially diluted clone of the Khrushchev “thaw” that brought about Moscow’s cultural greats? Was Georgia intrinsically linked to the Soviet identity, conforming to the Soviet dogma even where it pretended to break it?

Kikabidze’s personal story showed that brilliance could shine in the greyness and that common decency, integrity, and honor are personal matters that transcend the silver screen. And that the Imperial accolades can be cast off in a single gesture when the man stands tall. 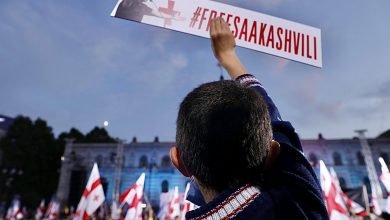