The Caucasus Research Resource Center (CRRC), a think-tank, released the results of its nationwide biannual survey in Georgia – Caucasus Barometer 2020. First conducted in 2008, the survey covers a wide array of issues, including welfare, social attitudes, migration, health (COVID-19 crisis too this year), conflicts, minorities, foreign and domestic policy trends in the three countries of the South Caucasus: Armenia, Azerbaijan, and Georgia.

This year, due to COVID-19 restrictions, the survey was carried out only in Georgia using the telephone interviewing method. 1501 respondents, aged 18 and above participated in the survey, while the interviews being conducted in Georgian, Armenian, Azerbaijani, and Russian. The fieldwork was conducted between December 8, 2020, to December 14, 2020.

Civil Georgia put together the main findings from the opinion poll, which draw a portrait of Georgian society, peoples’ take on substantial socio-economic, political subjects, and changes amid the unprecedented global pandemic mostly making the year, as CRRR put it, A Tumultuous 2020.

According to the Barometer, the Georgian society deems unemployment, low income, high prices, and other socio-economic difficulties among the most substantial problems they face. The research also demonstrated that the situation further deteriorated over the year, with two-thirds of the population stating that their family earns less than a year before.

Among the most important issues challenging the country, unemployment still tops (33%) the list as in the previous years. A mere 9% of the interviewees say that in the last 12 months someone in their family started a new job, in contrast with more than one quarter (29%) of the respondents claiming that someone in their family lost a job. Poverty comes second along with the new phenomenon of COVID-19, both equally amounting to 17% of the responses.

Rising prices, also an essential part of the socio-economic concerns, comes fourth (10%) in the rating convincingly overpassing geopolitical issues such as political instability in the country (3%), unresolved territorial conflicts (2%), and lack of peace in the country (1%).

For the majority of the population, salaries, pensions, and state aid are the main sources of income. In 2020, more people were found to be dependent on salary as the primary revenue (60%), while the share receiving remittances has decreased substantially (from 19% to 12%), presumably, due to the COVID-19-related global economic turbulences. As for the deposits/securities, nearly none of the respondents possess accumulated financial backings to provide for the households.

In addition to the existing difficult economic situation, the public does not see reasons to be encouraged about the positive future. Over one-third of the population is pessimistic about their financial situation, while a quarter is not certain about it.

The research found out that a significant share of the population has experienced symptoms characteristic of COVID-19, including fatigue, shortness of breath, lost sense of smell, and cough, however, only 20% of the respondents have been tested for the novel coronavirus.

A large share of the population (69%) says that their life changed a fair amount or a great deal as a result of the pandemic. Indeed, the fight against Covid-19 has progressed far beyond a mere healthcare challenge, with the government enforcing rigid socio-economic restrictions to contain the virus.

The country witnessed several demonstrations against the restrictions, however, the survey discovered that over half of the population believes that Georgia has done a somewhat good or a good job in dealing with the outbreak, with the majority (56%) supporting the regulations.

71% of the interviewees rather or fully support the country’s membership in NATO, which marks a substantial increase compared to 2019 (50%). Interestingly, according to the survey, Georgia’s ethnic Armenian and Azeri communities are significantly less supportive of Georgia’s integration into the Alliance than ethnic Georgians (75%), with support figures standing at 41% and 46%, respectively.

The Georgian population also overwhelmingly supports (73%) Georgia’s integration into the European Union. As CRRC noted, this rate has been one of the highest in recent years.

Given the modest support to the Russian-led Eurasian Union (20% partially or fully support) against the significant popularity of the Western institutions, the survey vividly reasserted the Georgian society’s firm approval of the country’s pro-Western political vector.

The recent Nagorno-Karabakh was has become one of the most important political events in the South Caucasus in 2020, which directly or obliquely influenced Georgia in many ways. Interestingly, 70% of respondents said they have heard of the conflict, of which 55% believe that the war could have been avoided. The majority of interviewees, however, found it hard to examine the roles of different sides in it.

It comes as no surprise, that ethnic Armenians assessed the role of Baku in the conflict mostly negatively, while ethnic Azeris expressed their views against Yerevan. Interestingly, the survey showed that ethnic Azeris perceive the role of the Azerbaijani government in the war by far more positively (80% of supporters) than ethnic Armenians commend the Armenian authorities’ endeavor in the conflict (34%). 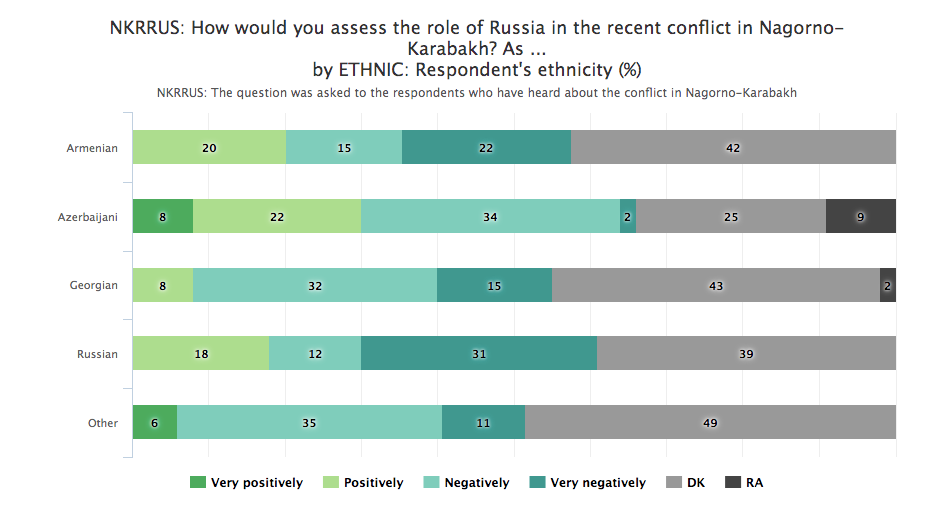 Asked in which direction the country is going, 31% said right direction, 15% responded it does not change at all, 36% reckoned the wrong direction.

Religious institutions (83%), the army (82%), police (56%) and the healthcare system (56%) are the most trusted social and political institutions. Political parties, NGOs and Parliament are the least trusted institutions, however, with their trust figures standing at 18%, 24% and 25% respectively. Distrust levels are higher for political parties (33%) and Parliament (32%) than towards civil society outfits (22%), however. The President and the banks are the most distrusted institutions, with 37% and 35%, respectively.

The trust levels towards a wide array of institutions, as CRRC underscored, experienced large increases this year. 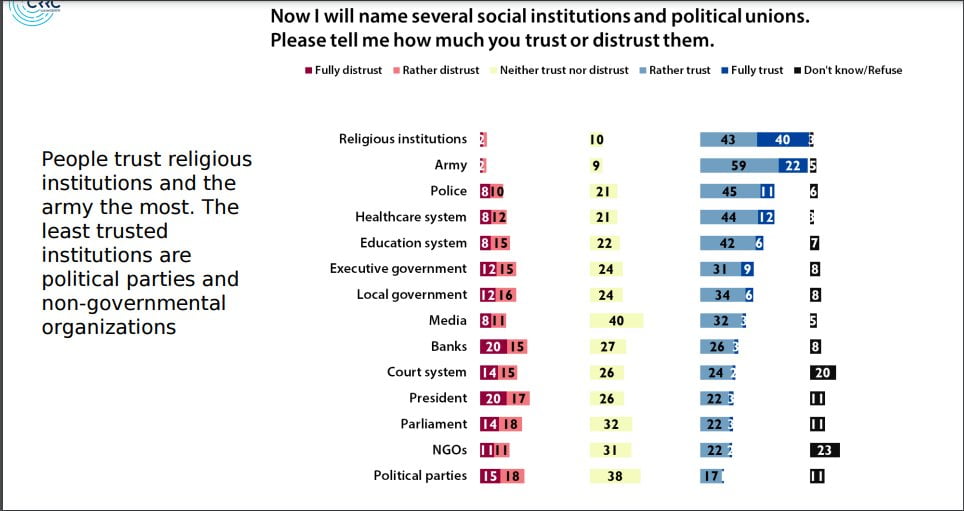 Regarding Georgias hotly-contested October 31, 2020, parliamentary elections, 57% believe that the polls were operated to some extent fairly or completely fairly, while 25% think that the polls were conducted not fairly at all. Compared to the 2018 Presidential Elections, the share of the interviewees who dubbed the elections to be organized unfairly has decreased from 31% to 24%.

Trust towards democracy, according to the survey, is one of the highest in recent years, with 58% of respondents saying democracy is preferable to any other king of government. 16% said in some circumstances, a non-democratic gov’t can be preferable. 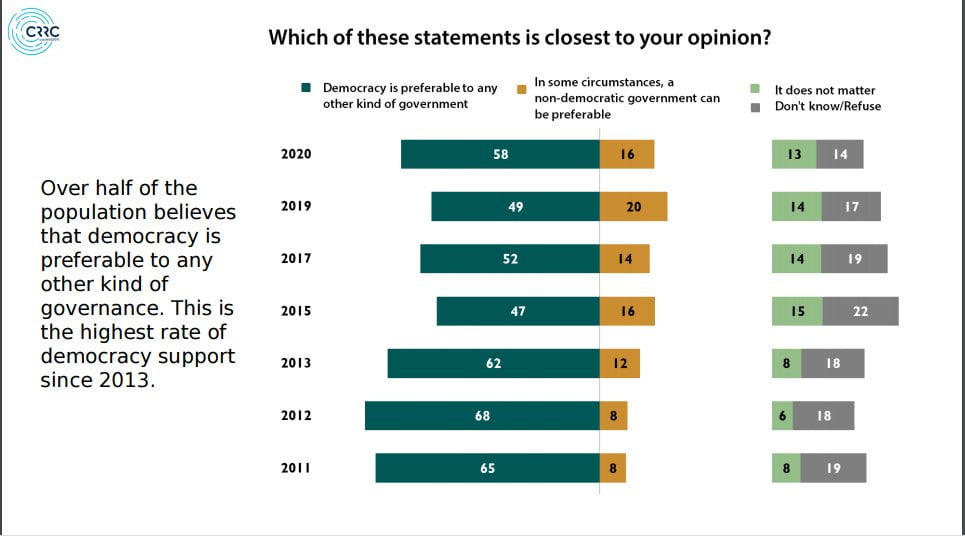 The majority of the respondents (32%) consider the ruling Georgian Dream to be the closest party to them, while the United National Movement comes second with 7%. The nihilism towards the political parties is evident in the survey, with 30% of the interviewees claiming that there is no party they sympathize with.

Probe Launched into Alleged Incitement to Suicide by Police in Marneuli