The statement came on June 4, as the news emerged earlier that day that Adjara TV and Radio Company reportedly refused to continue the contract with Shorena Glonti, who served as a news website consultant over the past three months. Earlier in February, Glonti, a key figure in maintaining the editorial independence of the broadcaster, was dismissed as the head of newsroom.

“The developments around Adjara TV are critical and should not remain beyond public attention,” the Coalition stressed.

The media watchdogs also focused on a protest rally ongoing outside the television premises for eight consecutive days, demanding the impeachment of Adjara TV director, Giorgi Kokhreidze, as well as reinstating the dismissed journalists. One of the protesters, Aleksandre Milorava, has gone on a hunger strike.

The Coalition said it lays full responsibility for the developments on Adjara TV management, its director Giorgi Kokhreidze and the board of advisers.

Emzar Paksadze, head of Adjara TV’s HR department, slammed the protesters’ demands for being “politically biased” aiming at “interfering in the broadcaster’s functions.” Paksadze stated that two of the demonstrators – Aleksandre Milorava and Shota Tsaava – have previously ran on opposition party lists in elections. “Aleksandre Milorava donated money to European Georgia party ahead of the 2017 local elections,” he added.

For the past few months, Adjara TV journalists have recurrently protested over their persecution and attempts to change independent editorial policy under the management of Giorgi Kokhreidze, who was elected as the broadcaster director in November 2019 with the support of the ruling Georgian Dream party nominated members of the board.

Several journalists, including Shorena Glonti, who were affected by the decisions of Kokhreidze, have already sued Adjara TV and Radio company to breaching their labor rights.

Follow our tag for more background about developments in Adjara TV. 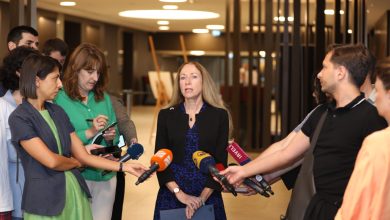