With 75 votes in favor and two against, the Georgian Parliament endorsed the credentials of Badri Basishvili at its January 17 session. The latter will replace former MP of the opposition United National Movement (UNM) Nika Melia.

The Parliament terminated Melia’s mandate on December 12 after Tbilisi City Court found him guilty of abuse of office in forcing the Cartu Bank – of the chairman of ruling Georgian Dream party, Bidzina Ivanishvili – into bankruptcy in 2013. Melia served as the head of the National Bureau of Enforcement of Sanctions at the time.

MPs of the United National Movement and European Georgia boycotted the session as a sign of protest.

In 2012-2013, Badri Basishvili served as deputy governor of Shida Kartli region; in 2006-2008, he was chairman of Tskhinvali Region’s (South Ossetia) the Kurta Municipality Council (Sakrebulo) . Earlier in 2004, he served as an advisor at the Office of the Georgian President’s State Representative. 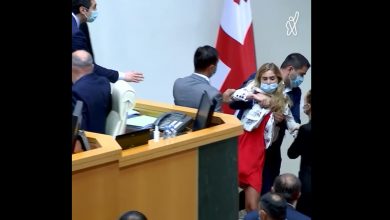