According to their press offices, the Georgian delegation will hold meetings on the sidelines of the annual conference.

On February 14, PM Gakharia met with the United States Secretary of Defense Mark Esper. The two parties discussed mutual commitment to stability and security. “The U.S. supports Georgia’s sovereignty and territorial integrity, and we are grateful for Georgia’s many contributions to global security,” Esper stated.

Discussed our mutual commitment to stability and security with Georgian Prime Minister H.E. @GakhariaGiorgi. The U.S. supports Georgia’s sovereignty and territorial integrity, and we are grateful for Georgia’s many contributions to global security. #MSC2020 pic.twitter.com/53NZixLJuG

On his part, PM Gakharia thanked Secretary Esper for the American financial assistance to Georgia. According to him, the country remains committed to its defense efforts, and is following the NATO standards, for example in burden sharing in 2% of GDP defense spending.

Georgian Defense and Foreign Ministers, who attended the meeting with the U.S. official, held separate meetings with their counterparts as well.

Defense Minister Garibashvili met with his Canadian counterpart Harjit Sajjan. During the meeting, Garibashvili spoke of defense cooperation with Canada and its contribution to the Substantial NATO-Georgia Package (SNGP). He underlined the importance of Canadian-led Maple Arch exercise to be conducted in Georgia. 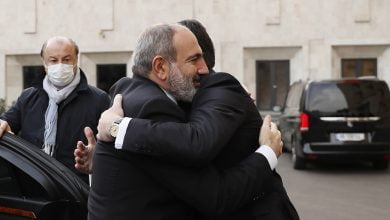