The U.S. Department of State Spokesperson, Morgan Ortagus released a statement on December 23, saying that “we urge the Georgian government to reinforce its commitment to the principles of democracy, individual liberty, and rule of law by ensuring that its judicial and prosecutorial system is free of political bias.”

Spokesperson Ortagus also noted that “the United States supports a secure, prosperous, and democratic Georgia,” adding that “we commend the recent progress made on the fourth wave of judicial reform.”

The U.S. State Department’s statement triggered mixed reactions from the ruling Georgian Dream party and the opposition. Civil.ge offers you a compilation of these assessments.

Gia Volski, Parliament’s First Vice Speaker: “No translation will distort what is really written in the State Department’s statement. A couple of days ago, the Acting Ambassador of the United States said the same. The Prosecutor’s Office, the judiciary and the work of any public agency should be improved. The activities of the Prosecutor’s Office are especially interesting. The Prosecutor’s Office should enjoy more public trust than it enjoys now, but it has more trust now than it had before 2012 and this is the fact.”

Kakha Kaladze, Georgian Dream’s Secretary General, Tbilisi Mayor: “Most important is that they are positively evaluating judicial reform. They are positively evaluating the steps taken by us in terms of democratic consolidation. It once again proves that Georgia enjoys a huge support from our strategic partner that can only be welcomed. They actually see and appreciate positive processes ongoing in the country. Of course, challenges do exist. There is not a single country, even the most developed and democratic countries, where everything is okay. So, we will do our utmost to respond to these challenges in a dignified manner.”

Kakha Kuchava, Vice Speaker: “We understood the tone very well, because the statement was released in both English and Georgian languages and everyone could see whether it was praising us or slapping us in the face. But it obviously contains praising. We should remember one thing that when such supporting statements are made, there will always be the means spreading fake news and trying to neglect this support.”

Irakli Kobakhidze, Georgian Dream: “Not only the opposition understood this statement differently, but they even translated it differently and it points at their bias. The statement says nothing about politically [biased] prosecutor’s office or politically [biased] judiciary; it simply calls on Georgia to intensify its efforts to ensure that the prosecutor’s office and the judiciary are not biased… I know for sure that our opponents can also read this statement correctly, but they voice it otherwise. Actually, this statement expresses support [towards the government].”

Roman Gotsiridze, the United National Movement: “The statement directly says that Georgian justice, judiciary and prosecutor’s office are biased and that they are used for political repressions; that there is a police regime in the country and opponents are politically persecuted.”

Otar Kakhidze, European Georgia: “The U.S. State Department’s statement is part of the United States’ reaction – we listened to the statement by the Congress members, the statement made by the Senate’s Foreign Affairs Committee and these statements were very strict and this latter statement is a continuation of this line. Of course, when the government is called on that the prosecutor’s office should not be politically biased, it points at the gravest problem in the justice system.”

Ana Natsvlishvili, Lelo for Georgia: “This statement contains a clear and strict emphasis regarding the prosecutor’s office, because the latter has been persecuting at least one leader of all important political forces. In addition, there is almost not a single critically disposed media outlet in the country whose founder or director is not facing criminal charges. So, these cases are clear examples of selective justice, and many of them do not have any legal ground at all.” 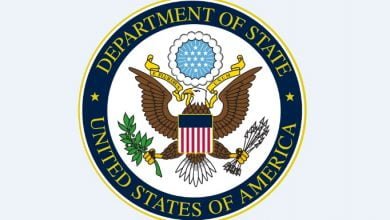