Parliament Speaker Irakli Kobakhidze has announced today that the Government of Georgia will withdraw the controversial draft bill that was to legalize cultivation of medical cannabis and its production for export.

Kobakhidze made the statement on November 2, following his meeting with Partiarch Ilia II and members of the Holy Synod. The Speaker said the ruling party made the decision at its gathering yesterday, where candidate Salome Zurabishvili was also present.

According to Kobakhidze, although “positions varied within the team,” the GDDG has “kept its initial promise” that it would make the final decision based on “wide societal consensus,” and “in agreement with the church.” “Yesterday, Salome Zurabishvili expressed her clear position that considering the public attitude, it was not worth to postpone this decision [further],” he said.

According to the Parliament Speaker, the withdrawal procedures will be initiated at the upcoming Government sitting.

“We have once again confirmed what has been proven many times before, that unlike the previous government, we are the government that takes public opinion with high responsibility,” Kobakhidze added.

Interior Minister Giorgi Gakharia, who also attended the meeting in the Patriarchate, stressed the withdrawal meant that the issue is entirely “closed.”

“Of course, the bill acquired a political context; we stated from the very beginning that it was extremely important for us to have a consensus around the legislation, but achieving the consensus considering the political context, including the elections, is impossible at this point,” Gakharia said.

“There was nothing wrong about the bill, but considering the political and the electoral context, as well as the public opinion and the position of the Patriarchate, the Government decided to withdraw the bill,” he added.

Father Andria Jagmaidze, a senior cleric in the Orthodox Church, welcomed the decision in his press remarks. “The public opinion was clearly against it and it is very good that the authorities are taking it into account,” Jagmaidze noted.

He also touched upon the initiative on limiting the Constitutional Court jurisdiction over drug policy, saying the court decisions should have “more legitimization.” “I do not know what they [the lawmakers] will choose, but one of the solutions could be to have the judicial panel consist of more judges,” he said.

Grigol Vashadze of the UNM-led coalition, who took a hard-line stance against the draft law in his campaign, convened a special press briefing on the matter.

Vashadze said: “the authorities failed to withstand the public pressure … this is a victory of Georgian citizens, of our society and of the united opposition.”

He, however, stressed that the GDDG leader Bidzina Ivanishvili has personal interest in the draft bill. “If he manages to seize the President’s office, he will immediately return the bill to the Parliament,” he warned.

Georgian Interior Ministry unveiled the draft legislation on industrial cultivation of cannabis on September 11, causing strong criticism from the public and the Orthodox church. GDDG backtracked on the legislation few days later. Although the draft bill was suspended, the legislation was not withdrawn.

For the extended background, we recommend reading our tag on Drug Policy 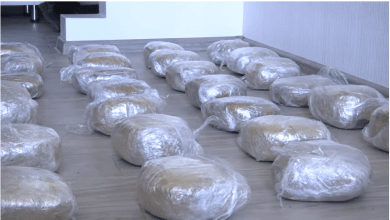 Police Seize 40 kg of Heroin in Cooperation with U.S. Authorities