Civil society groups and rights watchdogs have slammed MP Sopio Kiladze of the ruling Georgian Dream party, who also chairs the Parliament’s human rights committee, for her remarks concerning the International Day against Homophobia and Transphobia, and called on the Parliament of Georgia to uphold the rights of the vulnerable groups.

The CSO criticism follows Kiladze’s press remarks on April 30, when she confirmed that the human rights committee would not mark the International Day against Homophobia and Transphobia on May 17, despite earlier plans to do so. Asked to provide reasons for the decision, Kiladze quipped: “it is up to us whether to mark this day or not.”

The Coalition for Equality, which unites eight rights groups, responded to the Human Right Committee Chair with a statement on May 3, saying the decision was “a continuation of the Parliament’s practice of not recognizing and neglecting the rights of the LGBT community.”

“Despite the Georgian Parliament’s critical role in human rights and equality policies, discriminatory attitudes and sentiments towards marginalized groups have frequently been voiced in the Parliament,” the statement reads.

Kiladze’s remarks were also criticized by the Equality Movement, an LGBT rights group. The latter held a rally outside the Parliament building in Tbilisi on May 1 demanding Kiladze’s resignation. A counter-demonstration was held nearby by the Society for Children’s Rights, a socially conservative group.

Over 30 CSOs joined the calls for Kiladze’s resignation. In a statement released on May 1, the organizations claimed Kiladze’s attitude towards vulnerable groups “is incompatible with the government’s official policy, and in some cases contradicts it, has a discriminatory and homophobic nature and aims at legitimizing the oppression of specific groups.” 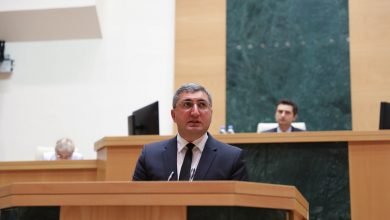