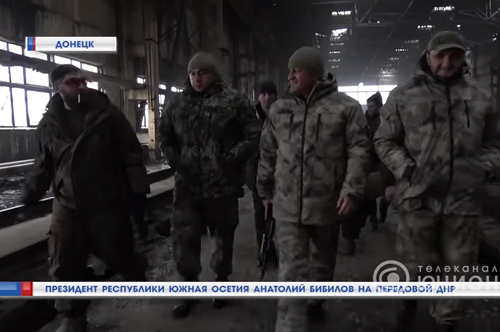 Western Voices – Senate Democrats report on Russian aggression: Members of the U.S. Senate Foreign Relations Committee from the Democratic Party issued a 206-page report on Russia’s aggressive actions abroad. The report contains numerous references to Georgia and Russia’s actions against the country, as well as recommendations for the U.S. executive branch to actively oppose the Russian strategy against its neighbors and the West.

Russia’s Network – Bibilov discovers South Ossetia’s “twin:” The Russian-backed Tskhinvali leader went to the Republika Srpska, as the Serb entity within Bosnia is called. Its president Milorad Dodik has been cozying up to Moscow for years, which apparently influenced his decision to host Bibilov. Dodik also harbors separatist inclinations, which he expressed while hosting Bibilov: when asked about a diplomatic note Georgia had sent to Bosnia expressing its dissatisfaction with Bibilov’s trip, Dodik responded that Bibilov was visiting the Republika Srpska rather than Bosnia and Herzegovina.

Bosnian authorities responded with a statement expressing their respect for Georgia’s territorial integrity, and another one saying that hosting Bibilov damaged the Republika Srpska’s international reputation.

Russia’s Network – Bibilov visits Ukrainian frontline: Before going to see Dodik, Bibilov went to the Russian-backed rebels in Donetsk region. Besides meeting their leader Alexander Zakharchenko, Bibilov visited the frontline positions of the militants that oppose the Ukrainian troops, bringing warm clothes and food as a New Year gift. Bibilov also specifically visited the Ossetian militants participating in the Donbass war against Ukraine. In an interview given during the visit, Bibilov said he considered Ukraine’s capital Kyiv to be “a Russian city.”

Russia’s Network – More Georgian territory claimed by Russia’s proxies: In an interview with the Serbian edition of the Russian propaganda Sputnik network, Anatoly Bibilov voiced claims on additional territories of Georgia beyond Tskhinvali Region/South Ossetia. Referring to the area east of the region, Bibilov said “it used to be Ossetia,” adding that “now, unfortunately, the history has made it so that we lost those lands. History is a peculiar thing, and tomorrow anything can change, as we have seen with the Soviet Union and Yugoslavia.”

Russia’s Network – Abkhazia polling stations for Putin’s election: 16 election precincts will be opened in Abkhazia on March 18, when Vladimir Putin gets himself elected as the Russian President for the fourth time. The Russian “ambassador” in Sokhumi Semyon Grigoryev declared on January 12 that it has been decided to increase the number of the Russian election polling stations in Abkhazia from nine to 16. “The Russian Society of Abkhazia” – an ethnic Russian diaspora organization – expressed its support for Putin’s election, while its head Roman Ryazantsev – a native of Russia’s subarctic Arkhangelsk region – called on Abkhazia’s residents to go to the precincts and vote for Putin on March 18.

Sokhumi Happenings – Opposition attacks Khajimba for prisoner’s release: Raul Khajimba faced a backlash after he “pardoned” an ethnic Georgian prisoner Giorgi Lukava, accused by Sokhumi of murder and kidnapping. Khajimba himself insists that Lukava’s release was a part of a tripartite prisoner exchange agreement that included Tskhinvali Russian-backed authorities. This argument failed to persuade either the opposition or the irate part of the public that gathered in protest rallies in Sokhumi. In the end, Khajimba’s supporters in “parliament” managed to postpone the matter by transferring it to the “constitutional court,” which has not started to function yet.

Interestingly, the organization of the Russian Cossacks in Abkhazia issued a statement in response to these events, accusing the opposition of acting “against the law and common sense,” and of helping the enemies of Russia and Vladimir Putin himself.

The Military Aspect – First 2018 exercise in Abkhazia: 700 Russian troops serving at the Russian military base in Abkhazia took part in their first military exercise held in 2018.

ECHR Case against Russia: The Georgian Young Lawyers Association, a Tbilisi-based rights watchdog and legal advocacy group, has lodged an application to the European Court of Human Rights against the Russian Federation over the murder of a Georgian citizen Giga Otkhozoria who was killed in the Khurcha incident at the Abkhazia occupation line on May 19, 2016.