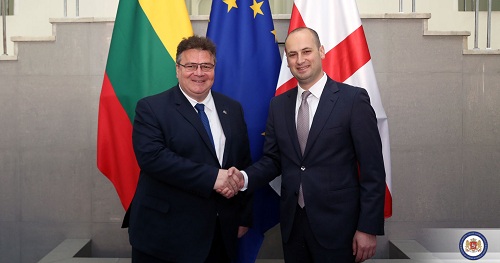 Lithuanian Foreign Minister Linas Linkevičius started his official visit to Georgia on June 11 by travelling to the Administrative Boundary Line (ABL) with Abkhazia, together with representatives of the European Union Monitoring Mission in Georgia.

“The international community cannot forget that the conflict – the creeping annexation of Georgian regions – continues. Not only the fights continue, but a significant part of Georgia’s territory is being cut off, which hits residents the hardest,” Linkevičius said following his visit to the Kurcha-Nabakevi pass, one of the two crossing points that were closed this year, and the bridge over the Enguri River, which connect Abkhazia with the rest of Georgia.

During the meeting with President Giorgi Margvelashvili, Linkevičius emphasized that “Lithuania strongly supports Georgia on its challenging path of reforms at a time when 20 percent of the country’s territory is still occupied.” He also thanked Georgia for its “solid contribution” to the NATO and EU missions.

In his remarks, President Margvelashvili expressed his gratitude for Lithuania’s support to Georgia’s territorial integrity and its Euro-Atlantic aspirations.

“Please convey my deep appreciation to the President of Lithuania for advocating Georgia’s interests at the NATO Summit. She is a great supporter for Georgia,” Margvelashvili said.

At the meeting with Prime Minister Giorgi Kvirikashvili, Linkevičius highlighted that Georgia, as the front-runner among the Eastern Partnership countries is “expected to uphold only the highest standards, also those of democracy.”

“Georgia’s progress is undeniable. But now when the most important goals of Georgia in recent years – the Association Agreement and visa-free travel with the EU – have been achieved, it is essential to maintain the pace of reform and to use these instruments widely for the benefit of the people of Georgia, as well as for further rapprochement with the EU,” Linkevičius said.

On June 12, together with his Georgian counterpart Mikheil Janelidze, Linkevičius chaired the 4th meeting of the Lithuanian-Georgian Commission for European and Euro-Atlantic Integration.

“I am glad that Georgia keeps moving forward on the path towards European integration. I wish you to maintain the pace of reforms and fear not to set new goals, as well as engrain democracy in Georgia,” Lithuania’s Foreign Minister said during the meeting.

The Minister spoke of Georgia’s aspirations to join NATO as well, noting that the accession of Montenegro to NATO demonstrated the Alliance’s commitment to its open door policy.

“Undoubtedly, time will also come for Georgia’s NATO membership, so Georgia must be fully prepared for this. It is important to continue to strengthen and deepen cooperation between NATO and Georgia, and to make use of all available practical tools, which will help the country prepare for its membership,” Linkevičius said.

At their meeting, Janelidze and Linkevičius also spoke on preparations for the 5th EU Eastern Partnership summit in Brussels and the Lithuanian-Georgian cooperation in bilateral and multilateral formats.

As part of their meeting, the two ministers signed a protocol of the 4th Georgian-Lithuanian Commission on European and Euro-Atlantic Integration.

Seimas Resolution and Action Plan in Support of Georgia

The visit of Linas Linkevičius comes less than a week after the Seimas, the Lithuanian Parliament, adopted a Resolution on the Need to Renew Commitment to Support Democracy, criticizing “the aggressive Russian foreign policy” in Ukraine and Georgia and urging the European Union to develop an ambitious vision for the Eastern Partnership.

According to the resolution, Russian actions aim at “disrupting the European security architecture and is responsible for the creeping occupation of Georgia, the continuing aggression in Ukraine, which has already claimed over 10 000 lives, the information warfare being waged against democracies and the interference with electoral processes in sovereign states in the Euro-Atlantic area which poses an increasing threat.”

The visit also comes a day after the Parliament of Georgia released the Action Plan on Support to Georgia for 2017-2020 adopted by the Seimas Foreign Affairs and European Affairs Committees, focusing on consolidation of Lithuania’s political, expert and financial support for Georgia, promotion of economic relations and investments, intensification of inter-parliamentary relations, etc.