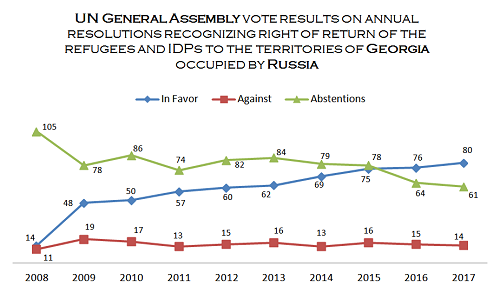 The United Nations General Assembly adopted on June 1 Georgia-sponsored resolution reiterating the right of return of all displaced persons and refugees to Georgia’s Abkhazia and Tskhinvali Region/South Ossetia by a vote of 80 in favor to 14 against, with 61 abstentions.

Similar non-binding resolutions have been passed by the UN General Assembly for ten years in a row – the first one, initiated in 2008, was in respect of Abkhazia and all the following ones in respect of both Abkhazia and Tskhinvali Region/South Ossetia.

Last year, 76 countries voted in favor to 15 against, with 64 abstentions.

Along with Russia, the following countries voted against the resolution: Armenia; Belarus; Burundi; Cuba; Laos; Nauru; Nicaragua; South Sudan; Syria; Venezuela, Vietnam and Zimbabwe. Philippines, which was abstaining in previous years, voted against in 2017.

North Korea and Sudan, which voted against last year, were absent from the Assembly chambers and did not vote in 2017. Uruguay, which sits on the UN Security Council as a non-permanent member, has swiched its position from abstention to support.

“For tenth consecutive years, the General Assembly has been adopting the document before us with encouraging dynamic of support. Countries from all regions of the world vote for the resolution due to its human appeal and humanitarian values. The resolution is an important message of support for hundreds of thousands of forcibly displaced persons, by reaffirming their right to return to their homes and claim their property,” Georgia’s UN ambassador, Kaha Imnadze, told the Assembly.

The Georgian Ministry of Foreign Affairs stressed in its statement after the vote that the resolution “reinforces the fundamental rights of the displaced, primarily, their right to safe, voluntary and dignified return.”

The resolution, the Ministry added, “bears purely humanitarian nature and rests on the fundamental UN principles of internal displacement – it condemns the forceful demographic changes in Georgia’s occupied regions, reiterates the right of the displaced persons to safe and dignified return, regardless of their ethnicity, and underlines the necessity of respecting and protecting their property rights.”

“The resolution has a practical importance as well, since it calls on the UN Secretary General to draft annual report on the state of the internally displaced persons in Georgia and on the implementation of the resolution,” the Ministry also noted.