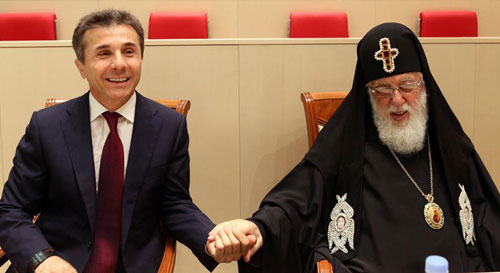 Bidzina Ivanishvili and Patriarch of the Georgian Orthodox Church, Ilia II, at an inaugural session of the newly elected Parliament on October 21, 2012. Photo: Ivanishvili’s press office.

Patriarch of the Georgian Orthodox Church, Ilia II, said on October 28 that Georgia’s previous and the new governments should work together for the benefit of the country and there should be “no revenge” and “no enmity”.

In a message on October 27, congratulating Bidzina Ivanishvili on taking Prime Minister’s office, the Georgian Church leader wishes Ivanishvili to create such an environment in the country where “the god, homeland and a human being will be the major values.”

“A symbol of the century was built when you started building the Holy Trinity Cathedral twelve years ago. And now by placing country’s yoke upon yourself, you have accepted challenge of the century,” the message reads.

Patriarch Ilia II also congratulated Davit Usupashvili on his election as new parliamentary chairman, telling him: “Your knowledge, experience, prudence and composure will contribute hugely to Georgia in these difficult times full of challenges.”