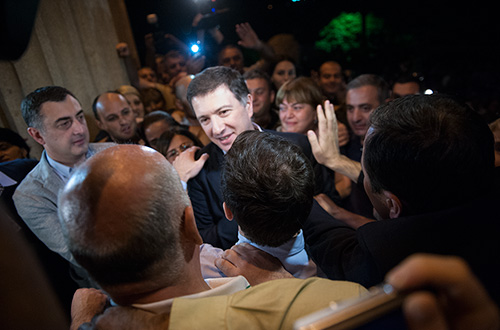 Gigi Ugulava surrounded by supporters and UNM party leaders outside the Tbilisi City Court shortly after the judge delivered guilty verdict against him late on September 18, 2015. Photo: Eana Korbezashvili/Civil.ge

Tbilisi’s ex-mayor and one of the leaders of the opposition UNM party, Gigi Ugulava, has been sentenced to 4 years and 6 months in prison after being found guilty of misspending of public funds while serving as the mayor of the capital city.

Tbilisi City Court has acquitted Ugulava on money laundering charges in a separate case, which was adjudicated as part of the same trial.

Ugulava, 40, was arrested inside the court building after judge, Lasha Chkhikvadze, delivered the verdict into more than 2-year long trial late on Friday night.

The verdict came a day after Ugulava was released from 14-month pretrial detention following winning a landmark Constitutional Court case.

He and his family members and supporters refused to enter the courtroom to listen the verdict in protest over what they said was “farce” trial.

Ugulava was waiting for the ruling outside the court building where UNM activists and supporters were gathered.

After the verdict was delivered he entered into the court building, where he turned himself in to court marshals and from where he was escorted to prison.

“I am now going to have a rest,” he said smiling in a court lobby while waiting for being escorted back to prison from where he was released about 24 hours earlier.

Original sentence delivered by the judge was 9-year imprisonment, but it was truncated to 4 years and 6 months, because the  charges against him were falling under the amnesty act, which was passed by the Parliament in December, 2012.

Ugulava’s lawyer said the verdict will be appealed to higher court.

Ex-defense minister, Davit Kezerashvili, who was standing trial in the same court proceeding in absentia, was acquitted.

Misspending charges in which Ugulava was found guilty were stemming from the case dating back to late 2009, when he was the mayor of Tbilisi.

The prosecution claimed that Ugulava siphoned off GEL 4.1 million of public funds by creating over 700 fictitious job positions in the capital city municipal service through which funds were funneled to pay salaries of UNM party activists.

The same trial, which started in the first half of 2013, was also into a separate set of charges involving money laundering, which were stemming from prosecution’s allegation that Ugulava, and ex-defense minister Kezerashvili, misappropriated several millions of U.S. dollars in so called Rike deal for the purpose of taking over Imedi TV in 2008. Both Ugulava and Kezerashvili were acquitted in this episode.

It was one among several other trials, which Ugulava is standing in connection to multiple other criminal charges, all of which he denies as politically motivated.

After the judge adjourned for several hours before the ruling late on Friday afternoon, Ugulava said: “The goal [of the trial] is not to find the truth; the goal is to jail me.”

Other leaders of the UNM party, who were gathered outside the court building, were also saying before the ruling was delivered that that the guilty verdict had already been “pre-written” by “informal ruler”, ex-PM Bidzina Ivanishvili.

Addressing supporters outside the court building on September 18, Ugulava said that he was confident that the GD coalition would suffer defeat in the next year’s parliamentary elections.

“2016 is the maximum term for Ivanishvili to stay in power,” he told supporters, who were chanting “Gigi, Gigi”. 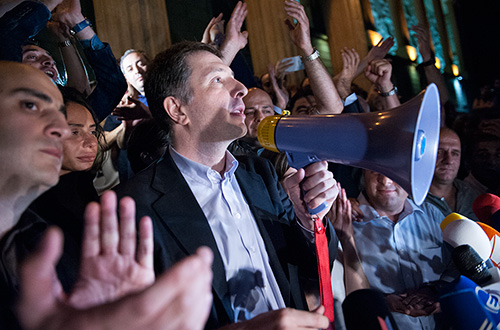 Gigi Ugulava addresses supporters through a megaphone outside the Tbilisi City Court, shortly after the judge delivered guilty verdict against him late on September 18, 2015. Photo: Eana Korbezashvili/Civil.ge

The day before Ugulava said that Ivanishvili will have to pay “political price” if he was re-arrested.

Misspending charges over which he was found guilty on September 18 were among the first set of criminal proceedings launched against Ugulava in February, 2013. Other multiple charges in several separate cases followed and trials into those cases are still ongoing.

Additional charges against him came in December, 2013 involving alleged misspending of GEL 48.18 million of public money in 2011-2012. In connection to these charges the court at the time turned down prosecution’s motion for Ugulava’s pre-trial detention, but ruled in favor of a request to suspend him from Tbilisi mayor’s office. In May, 2014 the Constitutional Court ruled that Ugulava’s suspension from office was unconstitutional.

Separate set of criminal charges were filed against him in July, 2014, when Ugulava was chief of UNM’s campaign for the local elections. Charges involved alleged money laundering scheme through which, the prosecution claims, he was financing UNM’s election campaign. The court ordered his pre-trial detention in connection to this case.

Ugulava was in pre-trial detention, when in July, 2014 prosecutors filed new set of charges involving exceeding of official authorities, stemming from breaking up of the November 7, 2007 anti-government protests, as well as raid on and “seizure” of Imedi TV station and other assets owned at the time by tycoon Badri Patarkatsishvili, who died in February, 2008. Ex-President Mikheil Saakashvili and some other former senior officials were also charged in connection to the same case.

When the original 9-month pre-trial detention for Ugulava was nearing its end and he was about to be released, prosecutors re-qualified in March, 2015 one of the criminal charges against him, which gave the prosecution ground for asking the court to remand the ex-mayor in custody.

Although the Georgian constitution explicitly says that the term of pre-trial detention of an accused should not exceed 9 months, one of the clauses in the criminal procedure code, which was adopted in 2010 when the UNM was in power, was allowing detention beyond 9-month limitation if new set of charges were filed against the same person.

When in March, 2015 Ugulava’s pre-trial detention was extended beyond 9 months, he denounced it at a court hearing as a “rape of the constitution”.

In late April his lawyers took the case to the Constitutional Court, which ruled on September 16 that holding of an accused person in pre-trial detention beyond 9-month limitation is unconstitutional; as a result Ugulava was released from 14-month pre-trial detention on September 17, but about 24 hours later verdict was delivered to the first set of criminal charges against him and he was re-arrested.

Some leading figures from the UNM said after the guilty verdict was delivered that the party was considering holding a protest rally, which would be announced in coming days.