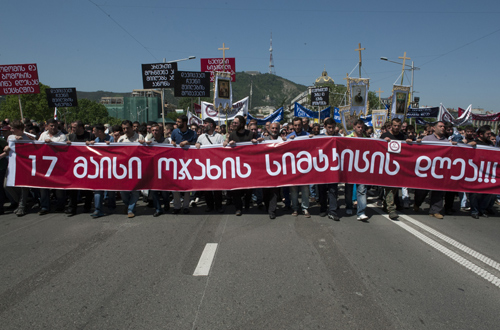 Demonstrators marching towards the Holy Trinity Cathedral in Tbilisi on May 17 carry a banner reading: “May 17 is the day of family strength.” Photo: Eana Korbezashvili/Civil.ge

Orthodox groups marched and rallied in downtown Tbilisi on May 17 to protest against newly adopted anti-discrimination law and to mark day of “family strength”, introduced by the Georgian Orthodox Church in an attempt to counter the International Day Against Homophobia and Transphobia (IDAHO). 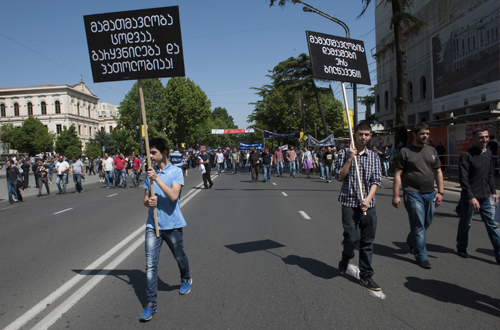 Youngsters at a demonstration on May 17 carry posters with one of them reading that homosexuality is “sin” and “pathology” and another one reading that those protecting gay rights are “making the nation immoral.” Photo: Eana Korbezashvili/Civil.ge

Last year an attempted anti-homophobia rally on May 17 in Tbilisi to mark IDAHO was violently disrupted by thousands of demonstrators, led by Orthodox clerics. Fearing homophobic violence, LGBT rights groups held no event this year. 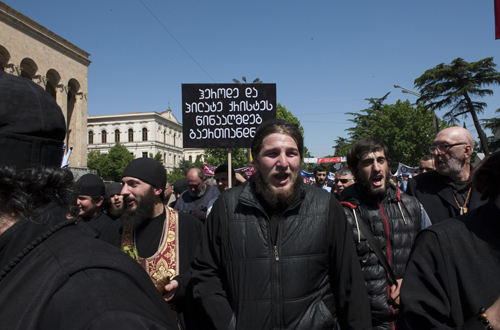 Demonstrators, led by Orthodox clerics, gathered outside the Philharmonic Hall before noon on Saturday and marched down the Rustaveli Avenue and moved to the Holy Trinity Cathedral, where the head of the Georgian Orthodox Church, Patriarch Ilia II, held a religious service. 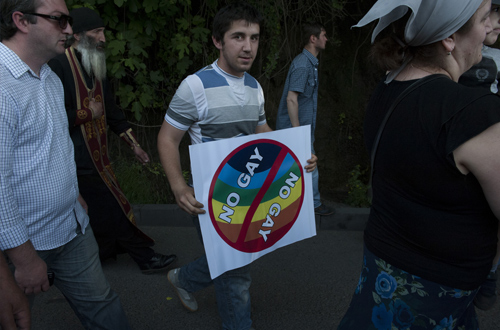 In his sermon, which focused on family issues and respect for parents, the Patriarch did not mention anti-discrimination legislation from which the Church wants to be removed “sexual orientation” and “gender identity”. Earlier this month Patriarch Ilia II said of this law that legalization of “illegality is a huge sin” and it will not be accepted by believers. 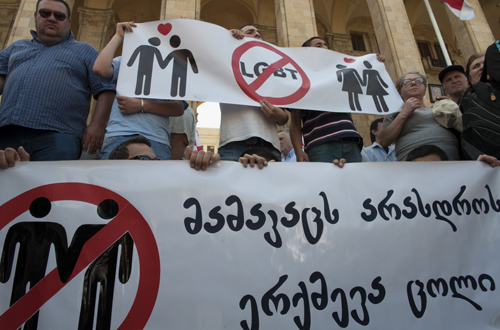 Protesters against anti-discrimination law outside the old parliament building on Rustaveli Avenue hold a banner reading: “A man will never be called a wife.” Photo: Eana Korbezashvili/Civil.ge 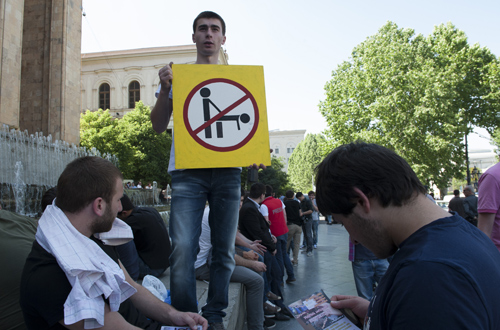 A protester at the rally against anti-discrimination law holds a poster outside the old building of parliament in Tbilisi as another protester reads a leaflet, which criticizes Justice Minister Tea Tsulukiani for supporting issuing of electronic ID cards, which some Orthodox groups say is “a seal of Antichrist.” Photo: Eana Korbezashvili/Civil.ge 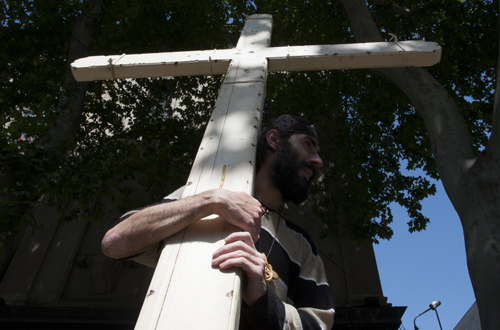 A participant of the march in Tbilisi center on May 17 holds a wooden cross. Photo: Eana Korbezashvili/Civil.ge

Meanwhile outside the old parliament building on Rustaveli Avenue few hundred people were rallying to demand from the authorities to revoke the anti-discrimination law. 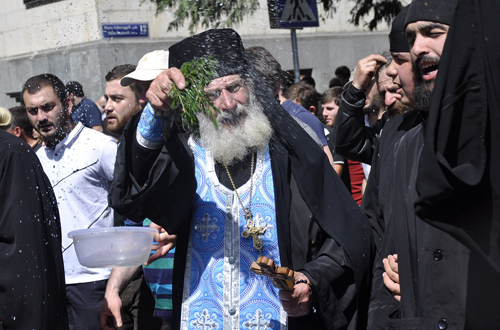 Orthodox priest seen during the march of demonstrators moving towards the Holy Trinity Cathedral on May 17. Last week head of the Georgian Orthodox Church, Patriarch Ilia II, said Georgia should mark the “day of strength of family and respect for parents” every year on May 17. He called to mark this day with church service and spraying streets with holy water. Photo: InterPressNews

In joint statement several local human rights organizations said that after last year’s violence on anti-homophobia day, which the police failed to prevent, and as a result of authorities’ “inefficient policies”, cases of hate-motivated violence against various minority groups, including LGBT community, has increased. 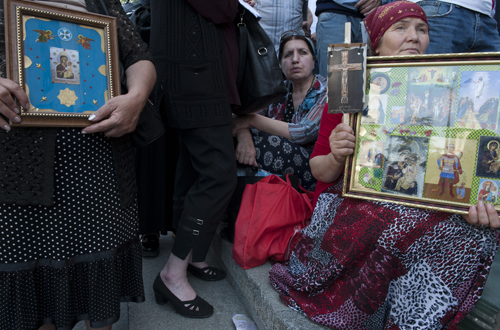 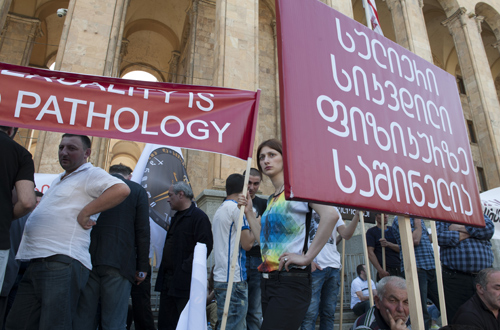 Protesters against anti-discrimination law rally outside the old building of parliament on May 17. Photo: Eana Korbezashvili/Civil.ge

Public Defender, Ucha Nanuashvili, said in a statement that although Georgia’s “legislation is not discriminatory” against sexual minorities, in practice problems remain with enforcement. 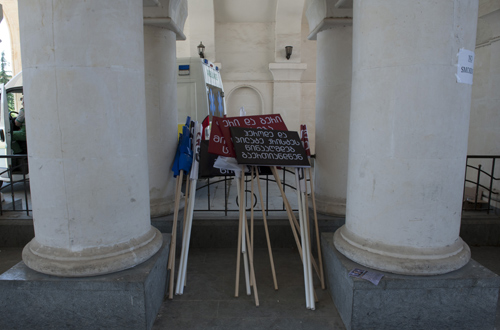 Banners, some of them with homophobic slogans, seen in the yard of the Holy Trinity Cathedral in Tbilisi on May 17. Photo: Eana Korbezashvili/Civil.ge

“Homophobic attitudes among the public remains a problem, which often results in hate crimes and other discriminatory actions. Unfortunately, no activities are carried out to increase public awareness that would help to destroy stereotypical attitudes,” Public Defender said in the statement, which also calls on the authorities to be efficient in addressing and investigating hate crimes.