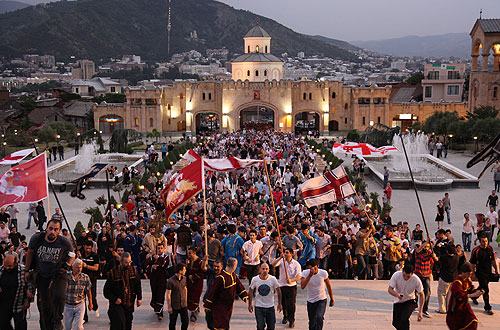 Participants of demonstration "in support of the Georgian Orthodox Church" outside the Holy Trinity Cathedral, July 9. Photo: Guram Muradov/Civil.ge

Thousands of people, led by priests from the Georgian Orthodox Church, marched in Tbilisi on Saturday evening to protest against legislative amendments on status of religious minorities in Georgia.

The demonstration was one of the largest held in Georgia in recent years.

Participants of the demonstration first gathered outside the Kashveti Church on Rustaveli Avenue and then marched towards the Holy Trinity Cathedral, passing outside the presidential palace.

"Expression of our faith and position should be peaceful; that’s what the Church is calling on us – to express what we have to say and to make the authorities hear what we have to say; let’s believe that they will heed to our calls," senior cleric from the Georgian Orthodox Church, Mitropolitan Daniel, said while addressing people gathered in the Holy Trinity Cathedral.

The head of the Georgian Orthodox Church, Ilia II, made a brief address to the gathering in the cathedral and said, quoting the New Testament: "Ask and it will be given to you; seek and you will find." 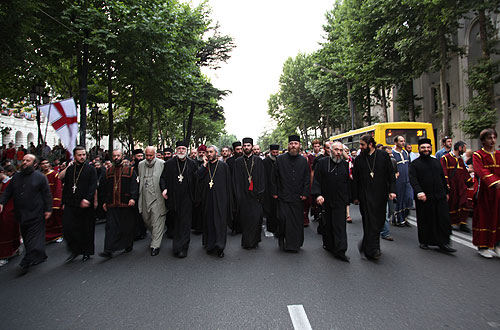 Participants of the demonstration, led by priests from the Georgian Orthodox Church, march towards the Holy Trinity Cathedral, July 9. Photo: Guram Muradov/Civil.ge

Some priests participating in the demonstration were saying the fact that the legislative amendment was passed with "ignorance" of the Georgian Church’s position was one of the major source of concern for them.

Echoing remarks by the Georgian Orthodox Church leader, Patriarch Ilia II, many participants of the July 9 rally were saying that the adopted amendments were "dangerous" for the Church and for the country.

The Georgian Orthodox Church’s multiple calls on the authorities not to hurry with adoption of the legislative amendment went unheeded and it was passed with three readings in a course of five days with second and final voting held on July 5. The bill was signed into law by President Saakashvili on the same day and it went into force next day, on July 6.

Developments surrounding the legislative amendments, allowing religious minorities to be registered as legal entities of public law, marked one of the most serious public confrontations between the Georgian Church and President Saakashvili’s administration. 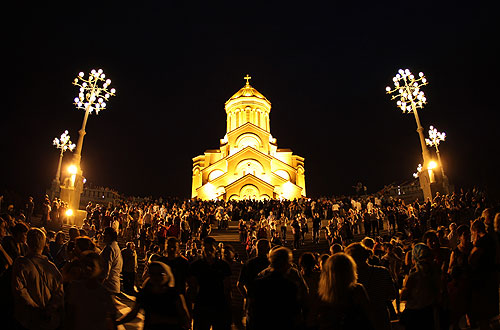 The Georgian Orthodox Church and its leader, Ilia II, said for number of times in recent days that they were not against of granting legal status to religious minorities. The Georgian Church, however, was calling for thorough and lengthy discussions over the issue and on the other hand it was also insisting that such move should only have been taken if a similar status was granted to the Georgian Orthodox Church in neighboring countries, in particular the focus was made on Armenia.

Gaining legal status has been long sought by some religious minority groups. The issue has also long been a source of criticism by the human rights and international organizations.

In its April, 2011 resolution on the honoring of obligations and commitments by Georgia, the Parliamentary Assembly of Council of Europe said it was "concerned by the lack of a proper legal status of, and legal protection for, denominations and faiths other than the Georgian Orthodox Church."

The resolution called on Georgia to "adopt a specific law on religion that would offer proper and equal legal status and protection to all faiths and denominations in the country." Although no specific law on religion was adopted, the authorities decided to address the issue through amending civil code by allowing religious minorities to be registered as legal entities of public law.