Archbishop Iakob (Iakobashvili) of Bodbe has accused For Georgia party leader, ex-PM Giorgi Gakharia of ordering to eavesdrop on clergy during his tenure as Interior Minister and alleged he plotted against Orthodox Patriarch Ilia II.

Discussing alleged State Service Security leaks in an interview with pro-governmental Imedi TV on September 17, Archbishop Iakob alleged that as an Interior Minister Gakharia demanded to eavesdrop and gather “kompromat” on the clergy from high-ranking Interior officials. The Archbishop asserted he obtained information from the very people who received the orders.

“Orders were coming from him, but I don’t know who gave him those orders, perhaps not from within our country,” the Archbishop went on, adding that Gakharia is “a man of Moscow.”

He also said his own conversations, which appeared in the leaked files and were recounted to him, in three instances sounded familiar. “But all took place during his [Gakharia’s] tenure.”

The Archbishop also alleged that on January 15 , 2018, he had a conversation with then-Interior Minister Gakharia about unseating Patriarch Ilia II. According to him, it was an attempt to “test grounds” and to see if Gakharia had his support in the Holy Synod: “If they had my consent, they would have gone with it [replaced the Patriarch].”

The clergyman also said the ruling Georgian Dream party should offer apologies to that nation for having “that kind of man” within the team earlier.

Former GD Prime Minister Giorgi Gakharia decided not to respond to the accusations directly, and instead, criticized the involvement of the clergy in the political process by “making statements and political assessments.”

The ex-PM also accused the government of using the church and then ”hiding behind their backs.” According to Gakharia, the governing party has fitted state institutions, including the church, to their own needs and has used its resources to retain power.

Noteworthy, Formula TV said files also contained briefs describing a conversation that supposedly took place in 2015 between GD founder, former PM Bidzina Ivanishvili, his wife, and Archpriest Bartlome Pirtskhalashvili, allegedly discussing four potential candidates that could head the Georgian Orthodox Church. The Archpriest confirmed with the government-critical TV that he had a similar conversation with Ivanishvili and his spouse “when the Patriarch was ill.”

The Ivanishvilis, according to the leaks, “positively described” Metropolitan Abraam Garmelia of the Western Europe Diocese as reformer, while “negatively” assessed Metropolitan Iobi Akiashvili of Urbnisi and Ruisi. 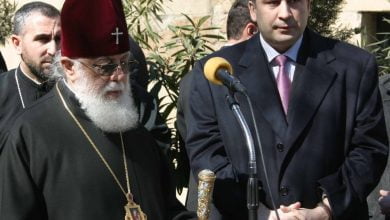