The ruling Georgian Dream party MP Zakaria Kutsnashvili has been suspended of his mandate at the fall session with 96 votes in favor on September 3.

Kutsnashvili had addressed the Parliament of Georgia with the request to suspend his mandate in July, following large-scale protest rallies on Rustaveli Avenue, Georgian Capital’s main thoroughfare, triggered by Russian MPs’ visit to Tbilisi.

Kutsnashvili served as the head of Georgian delegation to International Assembly on Orthodoxy (IAO) – one of those who organized the event that was attended by the Russian delegation, including Orthodox Communist MP Sergei Gavrilov.

Kutsnashvili addressed Georgian Parliament to have his MP mandate suspended following the protests that started early on June 20. The protests were triggered as Russian MP Sergei Gavrilov’s addressed the delegates of General Assembly of IAO, that he is the president of, in Russian from the Georgian Parliament Speaker’s seat. Civic activists and opposition condemned Kutsnashvili’s decision to invite Russian delegation in Georgia, demanding from him to renounce his mandate.

Today, on September 4, Rustaveli Avenue hosted 77th day of protest that was initially triggered by Kutsnashvili organized IAO. The protest actions are held every day since June 20, with protesters demanding Interior Minister Giorgi Gakharia’s resignation for his brutal handling of rally dispersion on June 20-21. 77th day of protest however, largely focused on the ruling party’s decision to elevate Gakharia for prime ministerial position, instead of chastising him. 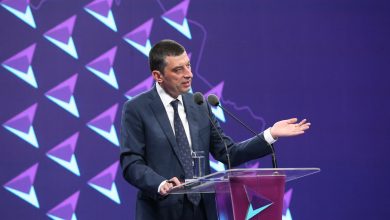