President Giorgi Margvelashvili and Parliament Speaker Irakli Kobakhidze are at odds over the appointment procedures of the Head of the Government of the Autonomous Republic of Adjara. The dispute follows the resignation of Zurab Pataradze on July 4, which forced the region’s entire cabinet to step down and triggered the government formation procedures.

The Constitution of Georgia, as well as the Constitution of the Autonomous Republic of Adjara, grants the President of Georgia a ceremonial role in the government formation process, but the procedures contain certain ambiguities, allowing the President to nominate a chairmanship candidate without approval of the central government and the ruling majority in the region.

President Giorgi Margvelashvili, however, is required by both constitutions to consult with political groups in the Supreme Council – the region’s 21-member legislative assembly – before nominating a candidate to the Council. To do so, Margvelashvili traveled to Adjara on July 13, meeting lawmakers from the ruling Georgian Dream-Democratic Georgia (GDDG), as well as from the United National Movement (UNM) and other opposition parties.

The Georgian Dream – Democratic Georgia has 14 lawmakers in the 21-member assembly, the United National Movement has four members, while the Alliance of Patriots, the European Georgia and Nino Burjanadze’s Democratic Movement have one lawmaker each.

In Batumi, the region’s capital, President Margvelashvili also held a meeting with Tornike Rizhvadze, the CEO of the state-owned Georgian Energy Development Fund, who was tapped to be the next head of government by the ruling majority in the region. Unlike in 2016, however, when Zurab Pataradze was the only candidate presented to the post, this time the President said he would also consider other candidates, including those of the opposition.

President Margvelashvili, who stressed he wanted to keep the process as inclusive as possible, continued consultations on July 14, including with a group of local civic organizations, who presented the candidacy of Gocha Gugunava. The President’s administration explained that consultations would continue until expiration of the constitutionally-permitted two-week period –  July 18.

It is, however, yet unknown whether President Giorgi Margvelashvili will manage to meet with the third candidate – Armaz Akhvlediani, a former executive secretary of the GDDG party – who was named on July 15 by a group of opposition parties, including the United National Movement, the European Georgia and the Democratic Movement.

Parliament Speaker Irakli Kobakhidze, who insists the political consultations is a matter of formality, said the President’s decision to delay the process was “absolutely unclear.” “The situation is very simple; the Supreme Council elections were held in 2016 with GDDG gaining a convincing victory. The party has 2/3 majority, and therefore, the will of the people of Adjara should be the key factor [in the nomination process],” Kobakhidze stressed.

“It took us five years to explain to the President that he is required to present prime ministerial and ministerial candidates reflecting the will [of the people] as expressed in the parliamentary elections … and now, we have to teach him again that he has to act similarly in Adjara,” Speaker Kobakhidze noted, expressing hope that President Margvelashvili would “read the constitution properly and act accordingly.”

The Constitution of Georgia entitles the President to nominate a candidate to the Supreme Council – the region’s 21-member legislative assembly – within ten days after the latter’s powers are recognized (after elections) and following consultations with political subjects represented in the Council, but with prior consent of the Government of Georgia.

The document, however, does not set out procedures for when termination of government head’s tenure is not election-related, such as the case of Zurab Pataradze. These procedures are detailed in the Constitution of the Autonomous Republic of Adjara, which echoes the provision of the Constitution of Georgia, but drops the requirement for the President to seek the consent of central government.

Consequently, the constitutional provision allows the President to nominate a candidate without approval of the central government and the ruling majority in the region. In practice, however, the nomination can only be successful, if the candidate enjoys the support of the ruling party, since the cabinet requires a majority confirmation in the 21-member Supreme Council.

If the Supreme Council fails to approve the candidate and his cabinet twice, the President is entitled to dissolve the Council with consent of the Parliament and call early elections. 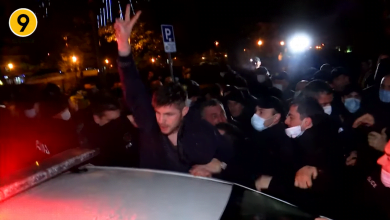 Arrests in Batumi After Protesters Swear at Garibashvili