A recent public opinion poll shows the ruling Georgian Dream-Democratic Georgia in lead with 27% support among survey respondents, followed by the United National Movement and the European Georgia with 17% and 7%, respectively.

The poll, released on Tuesday, was conducted by Baltic Surveys/The Gallup Organization for the International Republican Institute (IRI) between April 10-22, 2018. The survey was conducted through nationwide face-to-face interviews (excluding occupied territories) with 1,500 respondents and has a margin of error of 2.5%.

GDDG leads, UNM second, many have no favorites


According to the part of the public opinion survey, which examines voting intentions of respondents if parliamentary polls were held the following Sunday, GDDG currently has 27% support among respondents (up from 26% in 2017). GDDG nationwide party-list vote results stood at 55.81% in the October 2017 Municipal Elections.

Responses to the same question, show UNM with 17% support (up from 15% in 2017), followed by the European Georgia – 7% (same as last year); the Labor Party – 5% (down from 6%); the Alliance of Patriots– 4% (same as last year), and the Democratic Movement – 3% (up from 2%). 19% of respondents said they would vote for none of the parties and 14% either did not know or refused to answer, but additional 40 and 27% respectively have indicated these options as their second choice.

Bakradze and Natelashvili have the highest favorability rating among opposition politicians, followed by Grigol Vashadze and Nika Melia of the United National Movement with 32% and 31%, respectively.

These political ratings are part of a broader public opinion survey, which also looks into public attitudes towards multiple issues related to domestic politics and foreign affairs, including confidence in institutions.

Like previous similar surveys, the new one again shows that unemployment remains the top concern for most of the respondents, followed by economy, territorial integrity and social problems.

EU support high, NATO down, fear of Russia on the raise

Georgian television channels remain the main source of information about current international affairs for 90% of respondents (93% in 2017), followed by Georgian internet news and social media – 22% and 11%, respectively (21% and 13% in 2017).

6% of respondents identified Russian TV as the main source of information on international affairs, which is down by 1% compared to 2017. 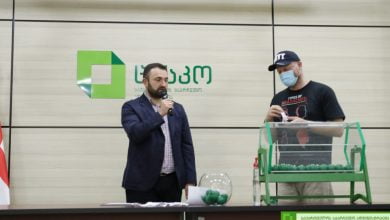 CEC Assigns Numbers to Parties ahead of 2021 Locals