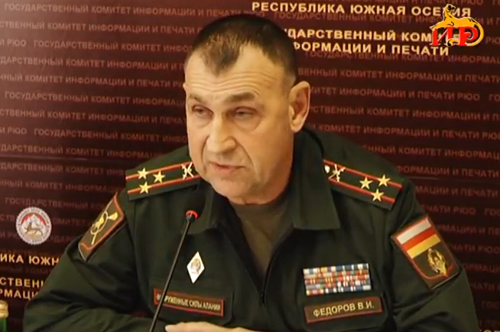 Geneva Talks – 42nd Round of the GID: Another round of the Geneva International Discussions was held on December 12-13, with Georgia listing numerous instances of ethnic discrimination and human rights violations in its Russian-occupied regions, and Russia complaining about the planned Javelin missile sale by the United States to Georgia.

Sokhumi Happenings – Idea voiced about Enguri river customs post: Russian-backed Sokhumi authorities’ “chairman of the state customs committee” Beslan Tsvinaria said he wanted to see customs established on the occupation line. “There must be customs on the border across Ingur [Enguri River],” thinks Tsvinaria, adding that “the border needs to be equipped in accordance with customs requirements, and the issue of collection of payments needs to be decided.”

Sokhumi Happenings – Budget adoption process launched:  Sokhumi “parliament” endorsed the region’s 2018 budget in the first reading. 27 members of the 30 attending supported the budget draft. Some of the opposition members are unpleased with its content, however, characterizing the document as “a budget not for growth but for survival.”

Tskhinvali Happenings – Local official hopes to decrease the number of people getting Georgian medical service: Tskhinvali “parliament” committee chairman Alan Kozonov is praising a new agreement with Moscow that will allow Tskhinvali Region/South Ossetia residents with a Russian citizenship the same medical services as those open for other Russian citizens. Kozonov lamented that too many people living in Tskhinvali Region used medical service in Georgia, saying their number had grown from 63 individuals in 2012 to 260 in 2016. He hopes that the new Russian medical service opportunity “will allow if not to absolutely eradicate, then at least to significantly decrease” the number Tskhinvali residents getting medical help at hospitals in the Tbilisi-controlled part of Georgia.

Russia’s Network – New citizenship rules planned for Abkhazia: Moscow intends to introduce two new citizenship agreements with the Russian-backed Sokhumi authorities, intended to regulate “the dual citizenship issues” and “the simplified procedure for the acquisition of the Russian citizenship” by the people residing in Abkhazia.

Russia’s Network – Duma members meet Sokhumi “parliament” representatives: During a session of the Parliamentary Assembly of the Belarus-Russian Union in the western Russian city of Bryansk, chairman of the Russian State Duma committee Leonid Kalashnikov and another Duma member Kazbek Taisayev held a meeting with representatives of the Sokhumi “parliament,” including its head Valery Kvarchia.