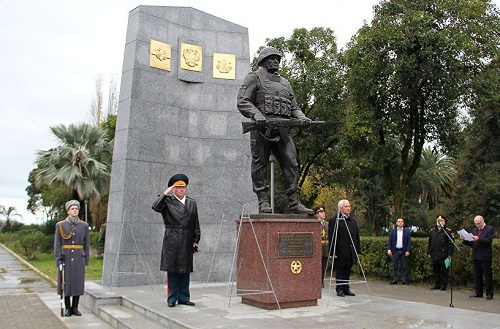 Western Voices – Friends of Georgia group expresses support: Canada, the Czech Republic, Estonia, Latvia, Lithuania, Poland, Romania, Sweden, the United Kingdom, and the United States, collectively known as the Group of Friends of Georgia, issued a statement during the 24th OSCE Ministerial Council, reaffirming their “full support for Georgia’s sovereignty and territorial integrity within its internationally recognized borders,” and calling on Russia to “fully implement the EU-mediated 12 August 2008 Ceasefire Agreement, inter alia to withdraw its military forces from the occupied territories of Georgia.”

View from Tbilisi – Janelidze lists international law violations: Georgian Foreign Minister Mikheil Janelidze spoke at the 24th OSCE Ministerial Council, held in Vienna, where he listed some of the specific things that are wrong about the Russian occupation of Abkhazia and Tskhinvali Region: “Russian occupation forces closed most of the so called crossing points across the occupation line, increased military presence, conducted more than 70 military exercises, through illegal agreements unified the military structures, continued the process of so called borderization and installed barbed wires dividing families, kidnapped hundreds of local civilians, prohibited native-language education in schools, continued deprivation of residence and property rights to ethnic Georgians, and et cetera.” Janelidze also mentioned “the recent reactivation of the policy of ethnic cleansing,” bringing up the demolition of “263 houses of Georgian IDPs in Eredvi village of the occupied Tskhinvali Region under the so called Russian investment program.”

On the Line – November numbers for the occupation line detentions: 66 people were illegally detained at the occupation line in November. 51 of them were taken at Tskhinvali Region/South Ossetia line, and 15 more by the Russian FSB border guards at Abkhazia line. Most of the detainees usually are local residents trying to conduct agricultural activities on their land, or move between their properties stranded at different sides of the occupation line.

Tskhinvali Happenings – Bibilov reiterates his wish to see Tskhinvali Region within Russia: Speaking at a book presentation in Tskhinvali, Anatoly Bibilov made it clear again he wanted to see “unified Ossetia” that would be a part of Russia, saying: “I am personally convinced that Ossetia must be unified, and this unification must happen within the Russian Federation.”

Russia’s Network – Russian peacekeepers monument opened in Sokhumi: A six-meter stela with a two-meter statue of a soldier in front of it was unveiled in Sokhumi. The Sokhumi Russian-backed authorities’ leadership was attending, along with representatives of the Russian government and military, as well as the Russian FSB border guards that serve in Abkhazia. The idea is to commemorate the Russian troops that were stationed in Abkhazia with the formal status of peacekeepers in 1994-2008.