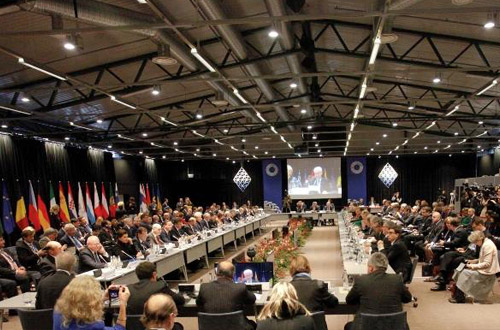 Georgia aims at being “a leader in both reforms and integration” with Europe, President Giorgi Margvelashvili told the Eastern Partnership summit in Vilnius and called for a donors’ conference next year to support Georgia on its path of closer political and economic association with the EU.

Georgia and Moldova initialed their respective Association Agreements, also including comprehensive free trade agreements (DCFTA), with the EU at the two-day Eastern Partnership summit in the capital of Lithuania, which now holds the EU’s rotating presidency.

Addressing plenary session of the third Eastern Partnership summit on November 29, President Margvelashvili for whom it was the first foreign trip since taking office less than two weeks ago, described the Association Agreement as “a master plan for transforming Georgia into a modern, genuinely European state.”

“We have departed from the post-Soviet paradigm and are gradually assuming our rightful place in the European community of nations,” Margvelashvili said according to a text of his address released by his administration.

“Recent developments show that the European path is challenging for countries in our region. This is why the EU’s support and assistance are crucial so that we can sign the Association Agreement and attached DCFTA in 2014,” he said.

Final declaration of the Vilnius Summit, which sums up the work done so far in frames of the Eastern Partnership summit and outlines road ahead, sets signature of AAs/DCFTAs “where applicable” by autumn 2014 among its goals.

The foreign ministers from the EU member states are now expected to outline several key areas and then the European Commission will develop concrete benchmarks in each of those areas based on which the EU will be monitoring performance of Georgia to assess its eligibility to sign the Association Agreement.

After the agreement is signed, it will then require ratification by legislative bodies of the EU-member states, as well as by the European Parliament.

Margvelashvili said that in line with EU’s “more-for-more” approach, Georgia is determined “to advance its reforms rapidly in order to timely consolidate its political association and economic integration with the EU.”

“We aim for Georgia to be a leader in both reform and integration,” he said. “In order to support our intensive efforts, we propose to convene a donors’ conference in 2014 in Brussels, inviting participants, including international financial institutions and the various national development banks, to support Georgia’s work towards realizing political association and free trade-related reforms. Holding the donors’ conference in Brussels would underline the EU’s support for Georgia’s reform agenda.”

Margvelashvili called on the EU for “coordinated” efforts to respond Russia’s “pressure” aimed at diverting Georgia from signing these agreements next year.

“I note that we also welcome the EU’s dialogue with Russia, explaining that the Eastern Partnership is not a policy directed against Russia but a win-win-solution that will increase economic prosperity, security and stability in our region, and will also benefit Russia,” he said.

He said EU’s support should focus, on the one hand, on mitigating “the threat” posed by the Russian military’s “recent activities along the occupation line with the occupied Abkhazia and Tskhinvali regions” and on the other hand on responding “in a coordinated way to any substantial pressure exerted by Russia in an attempt to divert us from our goal of signing the Association Agreement and DCFTA in 2014.”

Margvelashvili also said that closer association with the EU “is the key to peaceful reconciliation with our compatriots in occupied Abkhazia and Tskhinvali Region and the reunification of our country, because it is by attraction that we will draw these regions back into the Georgian state.”

On conflicts in Georgia, the Vilnius Summit declaration says that its participants support the activities of the EU special representative for South Caucasus, Philippe Lefort, who is one of the three co-chairs of the Geneva talks, launched after the August 2008 war.

Georgia’s foreign minister, Maia Panjikidze, said that text of the final declaration “is a success”, which, she said, reflects well the progress achieved by Georgia. She also said that Georgia “is satisfied” with wording of the declaration in respect of conflicts and noted that unlike declarations of two previous Eastern Partnership summits, in 2009 and 2011, the recent one  stresses need of the full implementation of the 2008 ceasefire agreement.

Politicians in Tbilisi from both the ruling and opposition parties were praising initialling of the AA/DCFTA as a “historic” moment for Georgia with UNM lawmakers stressing that it was the result of the work of the previous administration which was then continued by the new one. Some government ministers, in particular the Foreign Minister as well as Justice Minister Tea Tsulukiani, have also acknowledged the role of the previous administration in this process.

Meanwhile, in parallel to the Eastern Partnership summit a meeting of European People’s Party (EPP) was also held in Vilnius. MP Davit Bakradze, whose UNM party is a partner of EPP, attended the meeting which called putting an end “to the political prosecutions and selective justice” in Georgia and for release of UNM secretary general and ex-PM Vano Merabishvili from pre-trial detention. The EPP statement said these requirements should be a precondition for signing of the Association Agreement.

Foreign Minister Radosław Sikorski put it bluntly when asked in Vilnius what the EU leaders’ message to the Georgian government was: “If I sum it up in one sentence [the message] would be: You’ve had your Caucasian vendetta with the previous administration, but enough is enough and now continue reforms.”

Speaking at a news conference in Vilnius, President Margvelashvili said “political vendetta is a wrong thing to do” and vowed that there will be no politically motivated prosecutions and “to be completely consistent with rule of law.”