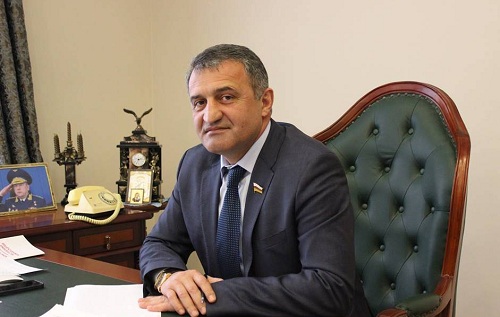 Election authorities in Tskhinvali approved on April 12 the final vote tally of the April 9 presidential polls in the region, confirming Anatoly Bibilov’s victory with 54.8% against his main opponent, incumbent Leonid Tibilov, who gained 33.7%.

Bela Plieva, head of the region’s election administration, reported that 32,365 voters turned out at polling stations on April 9, representing 79.63% of registered voters.

Final election result is as follows:

Plieva also said that the inauguration will be held on April 22.

She also announced that 80% of voters casted ballots in support of renaming the region into “the Republic of South Ossetia – the State of Alania.”

Anatoly Bibilov (b. February 6, 1970) studied at the Ryazan Airborne Command School in Russia from the age of eighteen, subsequently serving in the 76th Airborne Division, based in Pskov, Russia.

He went on to join the South Ossetian armed units in 1992. In August 2008 Bibilov participated in the Russo-Georgian War.

Bibilov’s first attempt to become the region’s leader failed in late 2011. His party United Ossetia, however, won majority in the legislature in 2014.

Shortly before the election, Bibilov said that the referendum on the region’s entry into the Russian Federation would be held in 2017.

On April 10, following the announcement of the preliminary results of the polls, Bibilov told the Russian TASS news agency that his strategic goal was for the region to become a part of Russia, but added that any steps to be made in this direction by Tskhinvali leadership would be “absolutely agreed with the Russian colleagues.”

Bibilov also stressed his loyalty to Moscow, saying: “strategic tasks of the republic, first of all towards our main and only strategic partner – the Russian Federation – will not change.”

Bibilov’s policy towards Tbilisi is similar to that of other Tskhinvali leaders. He demands from Tbilisi to sign with Tskhinvali a memorandum on non-use of force and to recognize the region as an independent state.