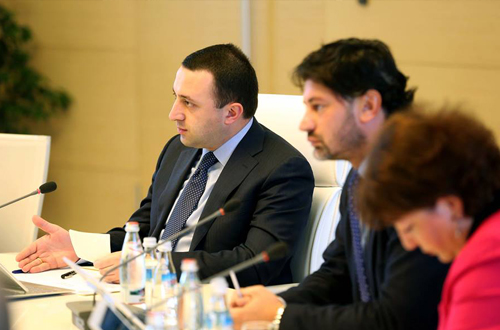 PM Irakli Garibashvili said UNM opposition party is a “criminal organization”, which has “no right to remain in politics” and “aggression” against the party is “natural” after videos of sexual abuse of detainees by law enforcement officers, when UNM was in power, were leaked to public domain.

Speaking during a government session on Thursday morning, PM Garibashvili said, referring to UNM: “They should be grateful for the fact that over the past three years people have not done to them the same what is depicted in these videos – my remarks might be rude, but they deserve it.”

In his lengthy statement the PM also commented on ownership dispute over the Rustavi 2 TV and also said that the UNM should “give up plans for any kind of provocation”, otherwise warned that the opposition party “will get what it deserves” from the people.

“As you know video footage was released again yesterday, which shows vividly how UNM members and UNM as a political organization were treating their own citizens,” Garibashvili said.

“I want to remind the society this story – this footage depicts scenes of brutal torture. Victims are ordinary people, who lived in a village in Samegrelo region, and who have never committed any crime. One man was kidnapped in the middle of the night… and he was tortured as shown in the video and because of failure to force him to admit committing a crime, which he had never committed, he was then convicted on other trumped up charges related to drugs,” he said.

“I am telling this because… in recent days I still hear assessments made by representatives of this criminal organization [referring to UNM],” Garibashvili said.

“I want to remind the society that these people have no right at all to speak with the society in a way they do now. Instead of apologizing before the public on a daily basis over the past three years for grave crimes they were committing, they still insolently continue insulting the public and the Georgian people, as well as attempts to create turmoil and chaos,” the PM said.

“This is absurd; I am confident that it is hardly possible to find even several dozen of people who would support and for whom it is acceptable what these videos depict – torture, rape and inhuman treatment; I wonder how many people are in Georgia, who support such criminal and brutal actions.”

“In general, as a citizen, I think that such people have no right to remain in politics. For me Saakashvili and his government represent the face of the masked person, who is raping other persons as shown on that video – this is a symbol of this organization,” Garibashvili said.

“It is really surprising for me – and I’ve been listening to remarks by various people, politicians, experts, journalists, who make focus not on what was going on in Georgia for years [when UNM was in power], but on how these videos were distributed,” Garibashvili said, adding that these videos were part of a criminal case, which was also accessible to lawyers of those who were defendants into those cases.

Speaking about blackmail allegations voiced by Rustavi 2 TV head Nika Gvaramia on October 21, the PM said those accusations seem to be a “provocation.”

“I listened yesterday to an incomprehensible statement by director of Rustavi 2 TV; I spoke with the chief prosecutor yesterday and as I know they already launched investigation into this issue,” he said.

“At a glance it looks like a provocation, but of course I think that it should be investigated and it would be better for us too to know if this person was really threatened with some video. But I did not have an impression that he [Gvaramia] has something to hide,” Garibashvili said.

He then commented on ownership dispute over Rustavi 2 TV, which is currently being adjudicated in the Tbilisi City Court. PM Garibashvili said that the plaintiff in the case, Kibar Khalvashi, former owner of Rustavi 2 TV, who tries to reclaim his shares in the broadcaster, has failed to achieve “justice” and restore his rights over “seized property” with the help of the government, because the latter is not interfering in media-related matters.

“The main principle of freedom of media is unchanged for us. I want to declare once again publicly that government’s involvement in developments over Rustavi 2 TV is completely ruled out. This is a dispute between private entities – a dispute between Saakashvili and Kibar Khalvashi,” the PM said, referring to Khalvashi’s allegation that ex-President Saakashvili is an actual owner of Rustavi 2 TV.

“For three years this man [Khalvashi] failed to achieve justice and failed to restore his violated rights and to regain his seized property, because we believed and still believe that government’s involvement in any form in matters related to media is completely unacceptable,” the PM said.

“Our involvement is completely ruled out. Therefore, I call on everyone to allow independent and impartial judiciary to take an objective decision and after that the parties will have the right and possibility to bring this case to the end; we will secure calm and stable environment for everyone and we will not allow any party to stage provocations,” he said.

The Rustavi 2 TV head said on October 21 that he would resist any court verdict that would order change of the broadcaster’s ownership.

“I was told that they also plan certain provocations at the court,” PM Garibasvhili said, referring to a rally of Rustavi 2 TV supporters, which is ongoing on October 22 outside the Tbilisi City Court simultaneously to court hearing into broadcaster’s ownership case.

“I know that the law enforcement agencies are working over this issue [expected provocation]. Purportedly so called supporters of Rustavi 2 TV, who in fact are supporters of UNM and supporters of those sadists [from torture videos] are planning to gather [at a rally outside the court building], to bring children there and to then stage a certain provocation,” the PM said.

“I warn everyone not to yield to this provocation; you have the last chance – I mean UNM – to apologize before the society and to give up plans for any kind of provocation. Otherwise, these people will get what they deserve – not only from the authorities, in case they violate the law, but from the people,” Garibashvili said.

“They should be grateful for the fact that over the past three years people have not done to them the same what is depicted in these videos – my remarks might be rude, but they deserve it,” Garibashvili said.

“They failed to appreciate our democratic and human treatment of them. Therefore I want to say it once again that today Georgia and our state is much stronger than it was three years ago and no one should have a sense that the state will allow such sadists and non-human beings to do something illegal – probably only 50 or 100 of them are now left, I wonder how many of them are, let them turn out and see how many of them are left.”

“I’ve heard assessments from experts, NGOs that distribution of these videos is bad – yes, we agree that it is very bad, public has seen shocking videos. By the way, two years ago when we investigated this case [of detainees torture depicted on the videos], we purposefully decided that the release of this video was inadmissible in order not to cause widespread aggression against UNM; it may sound paradoxical, but we protected them, but they failed to understand it,” Garibashvili said and then added by suggesting that some members of UNM themselves made those videos publicly available.

“The public should assess once and for all and decide what we were dealing with for years [when UNM was in power] – these were not staged situations; these are the actual stories, facts and I want to ask these people – how would you react if a victim in those videos was your family member, would you focus on how these videos were distributed or on terrible things that are depicted in these videos. I hope everyone has sense of justice,” he said.

“Of course the society is appalled… and shocked by these videos and of course I understand their reaction and aggression – every day aggression is being directed against UNM offices or [offices] are shut down. This reaction is understandable and natural for me; anyone would have such a reaction after watching those videos. Despite of that we should secure order and expression of protest should be done in frames of law and this reaction should not go beyond law,” Garibashvili said.

“I am not encouraging violence, but on the other hand I have no right to ban the right of expression for the people,” the PM said.