22,787 residents of predominantly ethnic Georgian populated districts of breakaway Abkhazia will be removed from voters list ahead of the early presidential election scheduled for August 24.

Last month acting president and speaker of breakaway region’s parliament, Valery Bganba, instructed the interior ministry to compile list of those residents of Gali, Tkvarcheli and Ochamchire districts, whose Abkhaz ‘passports’ have been deemed by the legislative body as illegally issued.

Deputy of acting interior minister of the breakaway region, Aleksey Lomia, told Sokhumi-based Abaza TV on June 30 that the ministry had compiled the data and sent it to the Central Election Commission.

Chairman of CEC, Batal Tabagua, said on July 1 that the election administrations is striking off voters list holders of passports deemed as illegally issued.

Four candidates have so far formally announced about intention to run in the August 24 early presidential election.

Forum of the National Unity of Abkhazia, one of the largest political parties in the breakaway region, nominated on July 1 its leader MP Raul Khajimba as a candidate. Vitaly Gabnia, chairman of union of the Abkhaz war veterans, Aruaa, has been named as Khajimba’s vice-presidential running mate. Both have been leading figures in the Coordinating Council, uniting political parties and movements which ousted breakaway Abkhazia’s leader Alexander Ankvab as a result of six-day protest rallies launched on May 27.

Ex-deputy prime minister, Beslan Eshba, will also be running as an independent candidate. Eshba was appointed as deputy PM by ex-leader of Abkhazia Alexander Ankvab in April, 20013 and served on this post up until Ankvab’s resignation.

The fourth candidate, who has so far announced about intention to run in the early presidential election, is ex-interior minister Leonid Dzapshba. He served as the interior minister for slightly over a year before quitting in October, 2011, two months after Alexander Ankvab won presidency in 2011 early elections. Like Khajimba, Dzapshba and his union of For Legality, Stability and Democracy, was part of the Coordinating Council, but opted to bid for president, instead of backing Khajimba’s candidacy.

Applying for registration as a candidate started on June 25 and the deadline will expire on July 14.

One of the requirements for being registered as a presidential candidate is knowledge of the Abkhaz language, which will be examined by a five-member “linguistic commission.” 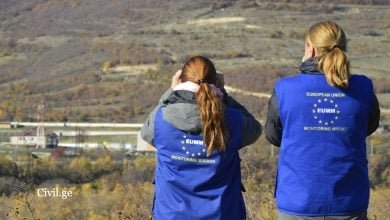