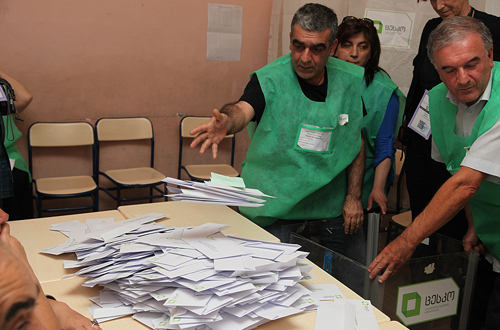 Polls have closed in Georgia’s local elections at 8pm local time on Sunday in which voters cast ballot to elect mayors of 12 cities, heads of 59 municipalities and 71 local councils, Sakrebulo.

Voter turnout was lower than in previous local elections four years ago and stood at 43.31%; Central Election Commission has yet to release the final figure, but three hours before the polling stations were closed turnout was at 34.64%.

Central Election Commission said that it will start releasing official results not earlier than 2am on Monday.

Exit poll results show runoff is possible in Tbilisi mayoral race, as well as in several other towns between GD and UNM candidates; exception is town of Gori where GD candidate is likely to face a candidate named by ex-defense minister Irakli Okruashvili’s party if the exit polls are confirmed by official results.

The most serious incidents reported during the day were cases of disrupting voting process at two provincial polling stations.

In one case ballot papers were snatched by two armed masked men from precinct No.16 in the village of Doshake in Martvili municipality of Samegrelo region. The incident occurred overnight on Sunday hours before the polling station was due to open. Central Election Commission and the Interior Ministry said that ballot papers, undamaged and sealed, were found close to the polling station and although with delay, but it was still possible to launch voting process at the precinct.

Another serious incident occurred in the village of Anaklia of Zugdidi municipality in Samegrelo region, where few local residents destroyed ballot box and some election documents in protest over authorities’ failure to find out whereabouts of their relative, missing since January, 2012. Later on Sunday afternoon, CEC announced that repeat elections would be held in that polling station in Anaklia.