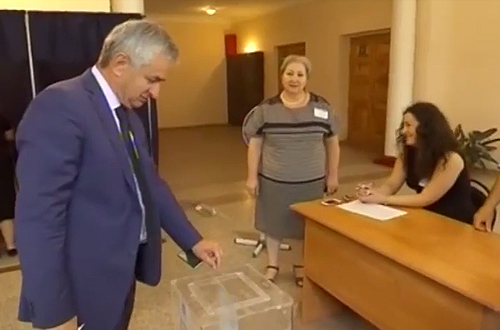 After three unsuccessful attempts to win presidency in three previous polls since late 2004, Raul Khajimba is now set to become the fourth leader of breakaway Abkhazia for a five-year term after wining snap election on August 24, which was called after Alexander Ankvab was forced out of office as a result of street protests.

Khajimba, 56, one of the leading figures behind protests against Ankvab three months ago, narrowly avoided runoff after garnering 50,494 votes, accounting for 50.57% of all ballots cast in the August 24 elections, according to the breakaway region’s Central Election Commission.

Aslan Bzhania, ex-head of the state security service, was second in the four-man race with 35,91%, followed by ex-defense minister Merab Kishmaria and ex-interior minister Leonid Dzapshba with 6.4% and 3.4%, respectively.

Voter turnout was 70%, according to the Abkhaz CEC. Thousands of ethnic Georgians, residing in eastern parts of the breakaway region, were removed from voters list ahead of the early presidential election.

Khajimba said on August 25 that reform of political system and achieving national unity would be his immediate priorities.

There was much talk during the campaign about the need for a constitutional reform to provide a better system of checks and balances. Before the election day, all four presidential candidates signed a joint declaration on “measures of achieving national unity and reforming political system” in which the candidates have pledged to form a coalition government after the presidential election, inviting “professionals” from across the political spectrum.

Vitaly Gabnia, 46, chairman of union of the Abkhaz war veterans, Aruaa, and one of the leading figures behind protests against Ankvab, was Khajimba’s running mate and will now become the vice-president.

“The time for reforms has come,” Gabnia wrote on his Facebook page after early results gave victory to Khajimba.

During the campaign Khajimba has been calling for even closer ties with Russia, but short of “association”.

Raul Khajimba, who graduated KGB’s academy in Minsk in mid-1980s, served in the KBG unit in the town of Tkvarcheli in Abkhazia before 1992. During the armed conflict with Georgia in 1992-1993, Khajimba served as chief of military intelligence on the eastern front. In late 1990s he was appointed as chief of state security service and then served as defense minister of the breakaway region since 2002 before being promoted by then Abkhaz leader Vladislav Ardzinba as prime minister in 2003.

He served as breakaway region’s vice-president in 2005-2009. Khajimba took that post as a result of a power-sharing agreement with then Abkhaz leader Sergey Bagapsh following a fiercely disputed presidential election in 2004 in which Khajimba was openly supported by the Kremlin.

Asked about elections in Abkhazia, PM Irakli Garibashvili told journalists on August 25: “I do not think I should comment on these elections, because these elections from the very beginning were considered as illegitimate, so I cannot comment seriously.”

President Giorgi Margvelashvili said in a statement on August 25, that these “so called elections represent yet another attempt to legitimize existing occupation.” He said that large part of Abkhazia’s population remains displaced as a result of ethnic cleansing and Russia continues to be in violation of the 2008 ceasefire agreement.

“Any attempt to legitimize this reality through so called ‘elections’ or creating illusion of presence of any element of democratic governance is absolutely outrageous,” the Georgian President said and thanked “the international community, which condemns so called ‘elections’ held in the occupied territory and supports Georgia’s territorial integrity.”

The Georgian Foreign Ministry condemned Abkhaz elections as “total disrespect and neglect of the fundamental principles of international law.”

Paata Zakareishvili, the state minister for reconciliation and civic equality, said that these “so called elections do not change situation in substance”. He also said that the Georgian side is ready to have contacts with any leader of the Abkhaz society.

The EU said it does “not recognise the constitutional and legal framework within which these elections have taken place."

NATO said “so called election” in Abkhazia “does not contribute to a peaceful and lasting settlement of the situation in Georgia.”

The U.S. Department of State said it does not recognize “the legitimacy of these so-called presidential elections” and “will not acknowledge their outcome.”

Ukrainian and Azerbaijani foreign ministries also released statements saying that they do not recognize “so called presidential elections” in Abkhazia.