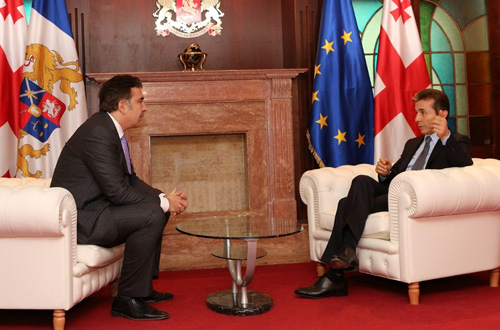 President Saakashvili and PM Ivanishvili met face-to-face for the second time on March 4 after the October parliamentary elections.

In between their first meeting in October and the recent one on March 4, the two also had a chance to chat at a reception in the Georgian Patriarchate in January where they were invited by the Georgian Church leader to mark the Orthodox New Year.

The March 4 meeting was held in a government building, known as the state chancellery, which houses PM’s office, the National Security Council, as well as offices of several state ministries. The building also houses the office of the President, which has not been used by Saakashvili since he moved to the presidential palace in 2009; the meeting took place in that presidential office.

After a hasty handshake with Ivanishvili not even looking at Saakashvili the two sat down for an hour and a half meeting.

Unlike their first meeting after the parliamentary elections in October, Saakashvili and Ivanishvili appeared before the press separately after the talks. President Saakashvili was the first to speak with journalists and the PM made his comments few minutes later.

Ivanishvili described talks as “the meeting for the sake of holding a meeting”, which failed to produce any progress and Saakashvili said it was “an interesting” meeting “full of emotions”, which provided an opportunity to exchange fundamentally differing views.

Speaking with journalists President Saakashvili listed three issues which he raised during the talks, involving need to stop, what he called “persecution” of UNM activists and low and mid-level officials from the previous government; independence of judiciary, which he said was under threat from the new authorities and new government’s “campaign to impose political control over media.”

Ivanishvili said sarcastically that it was ‘the pot calling the kettle black’ kind of conversation and suggested that during the talks Saakashvili was accusing him of the very same wrongdoings that the President himself was committing while his UNM party was in power.

“Did the president speak with you? Did you understand what we have reached?” the PM asked journalists and after receiving a response from the press representatives that they wanted to learn it from him, Ivanishvili responded smiling: “I don’t know it either.”

Ivanishvili said that Saakashvili came at the meeting unprepared and during the talks he had to get the President back on topic for several times.

“I reminded him several interesting issues, for example my letter… to which he failed so far to publicly answer,” Ivanishvili said referring to his February 26 open letter to the President in which he was asking him to state whether he supported or not proposed constitutional amendment offering to limit presidential power to sack sitting government and appoint new one without Parliament’s approval.

Last month talks between GD and UNM were close to reaching an agreement with UNM accepting GD’s constitutional amendments and GD agreeing on UNM’s several proposal, including making pro-western foreign policy course constitutionally guaranteed and increasing threshold for passing any new constitutional amendment in the future from current two-third (100 MPs) to three-fourth (113 MPs) of majority. But no agreement was made possible because of differences on the scope of possible amnesty for officials.

Asked whether there was any progress on the constitutional issues and scope of amnesty for the officials Saakashvili responded by reiterating his earlier remarks on the issue that the term “amnesty” in itself “is unacceptable and incomprehensible” for him.

“What does amnesty mean? It means that some people, let’s say 25,000 people, committed crime, but I see it otherwise – these 25,000 people built the modern Georgian statehood,” Saakashvili said.

Ivanishvili accused Saakashvili of inconsistency in talks, suggesting that when the agreement on constitutional issues in talks between GD and UNM was achieved last month, the UNM then pushed the issue of amnesty for officials, but now Saakashvili was saying that even the term amnesty was unacceptable for him.

After the meeting both of them expressed readiness to continue dialogue. Ivanishvili, however, said “it would be better if there are no such meeting like it was today, which was just for the sake of holding a meeting.”

“As usually, the meeting was full of emotions,” Saakashvili said, “but on the other hand, such meetings have no alternative.”