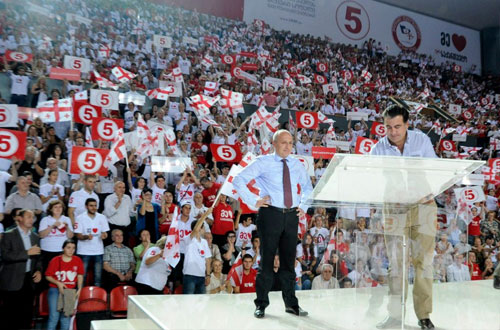 At the ruling UNM party convention in Tbilisi PM Vano Merabishvili (left) and President Saakashvili sign an “agreement with people”, pledging to deliver with their promises outlined in the government’s four-year program.

Those “hundreds of thousands” of people who went out into the streets across main cities on September 8 for ruling party’s campaign rallies, demonstrated Georgia’s unity, which in turn helps in thwarting “a huge provocation” against Georgia, masterminded by the Kremlin and its local supporters, President Saakashvili said.

He was speaking late on Saturday at the ruling United National Movement (UNM) party’s convention in packed Tbilisi’s Sports Palace.

Indoor gathering in Tbilisi was a culmination of day-long series of large outdoor campaign rallies in ten towns across the country on Saturday.

“Hundreds of thousands of our party supporters, activists and members went out [at these rallies]. It was the largest scale action in Georgia’s history and I am very proud of that,” Saakashvili said in somewhat hoarse voice as before Tbilisi he addressed supporters in seven out of ten towns where UNM held its outdoor campaign rallies.

“Today our people went out [at the rallies] and did a great job,” he said. “Our people went out in order to thwart a huge provocation which was being prepared. This provocation had a military element – unrests on our borders. Several days ago our police, our Defense Ministry prevented a very dangerous military provocation in the Lopota Gorge and our opponents, who are weeping today for the fate of terrorists and have not even utter a word about our [three special forces personnel] who died [in the clash], knew very well what this provocation was about; what this mess was all about.”

“This spring Russia threw into [Georgia] 2 billion dollars for Georgia’s elections, to finance its [Russia’s] candidate,” Saakashvili continued without specifying a “candidate”, but later in his speech he made direct references to leader of Georgian Dream opposition coalition Bidzina Ivanishvili.

“Their calculation was quite simple – uncertainty during the elections; bribing many foreign media outlets; creating a lot of gossips; inciting unrests after the elections; portraying Georgian people as being split and divided and then – in the conditions, when Russia rescheduled its military drills [Kavkaz-2012, planned for September 17-23] to coincide them with our elections – give them [Russia] a pretext to use our internal disorders and internal divide for implementation of their sinister plans.”

“Today, the Georgian nation has showed that it is as united as never. Therefore, the plan of our enemy has failed,” Saakashvili added.

One of the key messages in speeches of UNM leaders at the campaign rallies on September 8 was that upcoming elections would be about making choice between a return back into the past and going forward into the future towards further development. One of the main lines of attack by the authorities against their major rival in upcoming parliamentary elections, Ivanishvili and his coalition, is to claim that if this coalition comes into power it will result into derailing Georgia from its reform path and “throwing the country back into the past.”

“Do we want to go back to the times when decisions for us were made in the Kremlin?” Saakashvili asked supporters in the Sports Palace.

Seizing upon Ivanishvili’s quotes, used in a profile of the billionaire opposition leader ran by the Independent on September 8, Saakashvili said: “We have a candidate, who says that Putin decides who should do what in Georgia.”

He was referring to Ivanishvili’s remarks in which the Georgian Dream leader tells the Independent that when he was on good terms with Saakashvili he was meeting him in secret, to avoid the Russian leadership finding out. “If Putin had found out I was meeting him, my business in Russia would have been over the next day,” Ivanishvili is quoted.

Before Saakashvili took the floor in the Sports Palace, Tbilisi Mayor Gigi Ugulava told the rally that allowing “shadows of the past” to stop the country’s development would amount to “betrayal of Georgia’s future.”

“Our program is clear-cut: to never return back into the past; not to let destruction of what has already been built and to bring more benefit to people,” Ugulava said.

He said that the Georgian Dream was trying to bring into the Parliament “irresponsible, slacker people full of hatred.” He said Georgia could not afford “such a risk, as it will take many generations to rectify it.”

“They are not short of money and they want to buy something that is not for sale – hope and dream,” Ugulava said. “I want to tell them: hope and dream is in a vision for the future not in return of the past.”

PM Vano Merabishvili, who spoke at the UNM convention in the Sports Palace before Ugulava, said: “We should not let Georgia’s return back to 1990s.”

“Our key task is to erase from Georgia’s political map those dinosaurs of 1990s, whose shadows are still roaming in the streets of Tbilisi and Georgia. We should not allow those dinosaurs in the Georgian political scene,” PM Merabishvili said.

In his speech Merabishvili vowed to “defeat unemployment”; to boost agriculture; to provide affordable healthcare for each and every citizen in four years and to “give more benefit to people” through implementation of his government’s four-year program; he and President Saakashvili have also signed an “agreement with people”, pledging to deliver with their promises.

President Saakashvili said that most of the key promises he made, when coming into power as a result of the Rose Revolution almost nine years ago, had been delivered.

“Of course we have many tasks, which have yet to be fulfilled,” he said. “Main of them is restoration of country’s territorial integrity. This is the empire’s final struggle for restoration of the Soviet Union. Our brothers in Abkhazia and Tskhinvali region live in occupation and total lawlessness. But our territorial integrity has such international support today as never before and we will definitely liberate our entire country.”