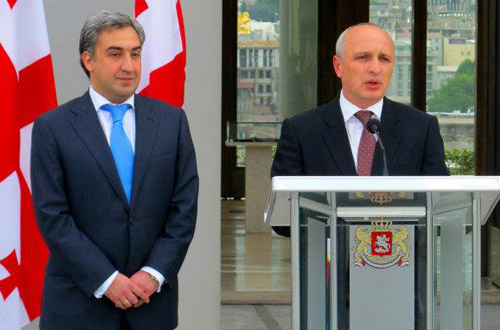 Vano Merabishvili (right) will replace on the post of prime minister Nika Gilauri (left), who will head the state-owned JSC Partnership Fund. On this official photo from President’s administration Merabishvili and Gilauri are seen during President Saakashvili’s announcement on June 30 about his decision to appoint Merabishvili as the new PM.

Reshuffle of the cabinet – probably the most significant one in years – comes few months before the October parliamentary elections, which Saakashvili said, “will determine Georgia’s development for next four years.”

This is the first time since the death of Zurab Zhvania in 2005, when the post of Prime Minister will be taken over by a powerful political figure.

“The statement I have to make today is very important for country’s further development and, at the same time, singles the new beginning,” President Saakashvili said in televised statement.

Standing alongside with former PM Nika Gilauri and incoming PM Merabishvili, the Georgian President said: “I am appointing Vano Merabishvili as Georgia’s new Prime Minister. He will present to the Parliament government’s new program and new cabinet for confirmation on Monday.”

“Vano is the man, who managed, together with us, to defeat corruption and crime; I am sure that he will also defeat our main enemy – unemployment,” Saakashvili said.

He also announced about the plan to introduce new post of State Minister for Employment.

Merabishvili, who is scheduled to present new cabinet and government’s new program for confirmation to Parliament on Monday, said unemployment, agriculture and healthcare would be the focus of his tenure.

Merabishvili said that his government’s program will be centered on three key priorities: “employment, agriculture development and availability of healthcare.”

“Our plan will be based on these major principles, because unemployment still remains the country’s main challenge; there are still too many people in Georgia, who are not able to receive proper healthcare and the Georgian agriculture needs development. I know that there are many unemployed people in Georgia,” incoming PM said.

After the Parliament approves new PM on Monday, Merabishvili is likely to retain his new post at least before the new Parliament, elected in October, is convened. According to the constitution after the October elections, the government and PM will have to resign and President Saakashvili will have to present new cabinet or re-submit the one existing at the time to the Parliament for confidence vote.

Georgia’s new constitution, which will significantly increase PM’s powers at the expanse of presidential authority, will go into force after the presidential elections in late 2013.

Former PM Nika Gilauri, who held the post since early 2009, will now become head of the state-owned JSC Partnership Fund. Gilauri, along with Merabishvili and now state minister for Euro-Atlantic integration Giorgi Baramidze, was the longest serving cabinet member in Saakashvili’s administration, holding energy minister’s and then finance minister’s posts before becoming PM in February 2009.

Gilauri, like most of his predecessors (except of late Zurab Zhvania), was a technocrat PM.

Some observers have already suggested that naming of powerful former interior minister as PM may signal that President Saakashvili is not considering remaining in power as PM after his second and final term in office expires in late 2013. But some commentators tend to view this recent cabinet reshuffle more in the context of upcoming parliamentary elections. Some observers speculate that by appointing Merabishvili as PM, Saakashvili is trying to sideline him from the powerful ministry of internal affairs.

It is not yet clear who will replace Merabishvili as a head of Interior Ministry –  a powerful structure uniting under its subordination broad range of “power-wielding agencies” from police, security and intelligence services to border guard and navy.

Vano Merabishvili is in politics since 1999 when he was elected in Parliament under then-ruling Citizens Union party list. He first came under intense public and media attention in April, 2001 when he told the Washington Post that then-President Eduard Shevardnadze was “tired” and not capable of taking decisive measures to fight against corruption. Merabishvili’s remarks at the time triggered controversy, highlighting tensions within Shevardnadze’s party. Year later he joined newly launched United National Movement party founded by Mikheil Saakashvili. After the Rose Revolution he served as Secretary of National Security Council and then as Security Minister for several months before becoming Interior Minister in December, 2004.

Born in the village of Ude in Samtskhe-Javakheti region, Merabishvili, who is now 44, graduated faculty of mining at the Tbilisi Technical University and before becoming a lawmaker, he ran Tbilisi-based non-governmental organization Association for Protection of Landowners’ Rights.