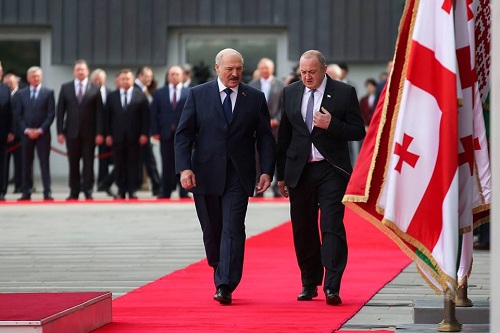 Belarusian President Alexander Lukashenko, who is paying his second official visit to Georgia, said that he considers Georgia as a friendly country, whom Minsk has “no closed themes with.”

Lukashenko, who arrived in Tbilisi on Thursday morning, held his first meeting with his Georgian counterpart Giorgi Margvelashvili, followed by his meeting with Patriarch Ilia II and Prime Minister Giorgi Kvirikashvili today.

“We discussed a wide range of issues of Belarusian-Georgian relations, focusing on trade and economic cooperation, which is advancing very successfully,” Alexander Lukashenko said at a joint press conference after the meeting.

“We have a good pace of economic turnover growth, and I am sure that soon we will pass the USD 200 million benchmark,” the Belarusian President noted, listing a number of joint Georgian-Belarusian business projects.

“These industries have good prospects, since our countries’ participation in regional integration projects opens up opportunities for export of jointly-produced goods to markets of third countries,” Lukashenko also said.

“You have a reliable base in the west, in the center of Europe, which you can use not only for communicating, but also for trading with others,” Lukashenko told Margvelashvili. “I am sure you trust my words, since we have never let you down.”

At the end of their meeting, Margvelashvili and Lukashenko concluded a framework agreement between the two countries.

Number of Belarusian officials, accompanying Lukashenko, signed with their Georgian counterparts about dozen of agreements and memorandums on cooperation in the areas ranging from finance, banking and agriculture, to education and healthcare.

Together with President Lukashenko we signed joint documents which will strengthen the long-term cooperation between the two nations in every field. pic.twitter.com/IqlxfixLVp

On March 23, the Belarusian President met with PM Giorgi Kvirikashvili, with Alexander Lukashenko expressing the country’s readiness to assist Georgia in the agricultural field and to train the local professionals in using the specialized equipment.