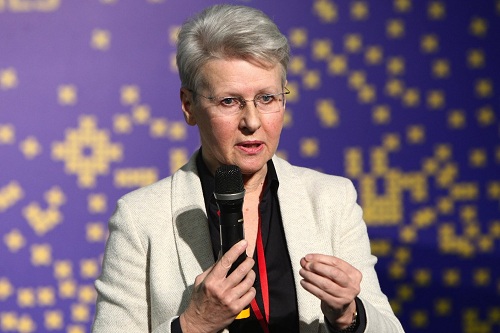 Civil.ge spoke on the internal and external politics of the Russian Federation, and on the upcoming presidential elections, with Lilia Shevtsova, associate fellow with the Russia and Eurasia Program at the Royal Institute of International Affairs (Chatham House).

Shevtsova, who previously served as chair of the Program on Eurasia and Eastern Europe of the Social Science Research Council in Washington D.C., sits on the editorial board of the American Interest, the Journal of Democracy and the New Eastern Europe.

Let us start with the internal politics of Russia. With the election commission’s rejection of Alexey Navalny’s right to participate in the presidential election of March 18, his supporters have announced an election boycott and protest rallies. In this context, what political developments do you expect in Russia in the short term?

The opposition segment of the Russian society has found itself split on whether to boycott the elections. And the sad irony is that, when mass popular boycott is unlikely, boycotting of the minority could only increase Vladimir Putin’s share of votes. As a result, the Russian society has found itself in a trap: voting for the candidates some of whom pretend to be in Putin’s opposition, would give the incumbent President an electoral legitimacy, while boycotting the elections would increase his electoral support. It is a dramatic dilemma, indeed.

So far, Navalny-led protest rallies have failed to create a mass political momentum – they were rather insignificant, in other words. While it is true that he has succeeded in building a nationwide network that could be beefed up in case of an anger tide, no one can guess when this could happen. At the moment, it is a sure fact that Putin will gain a convincing victory even if big cities like Moscow will dump him. The Kremlin’s problem is not the electoral victory, but what comes after that – the agenda for post-election development.

What is your general assessment of Alexey Navalny as a political leader?

Some of his views I view critically, but one should admit that he is the only political leader who can appeal to young Russian voters, and has created a functioning organizational framework for the oppositional movement. He is also a leader who has courage and drive to personally oppose President Putin.

What specific cause do you see as most likely to become the principal reason of a regime change in Russia, whenever that might happen in the future – population’s socio-economic grievances, misfortunes in the foreign policy, opposition’s activities, a roughly equal combination of all these factors, or, perhaps, something else?

Regime change in Russia could most probably happen under a combination of different factors, with growing poverty and the arrogance of authorities being the leading motivations. However, this is not the question that we should be thinking right now. What is more important is whether the future (and inevitable) regime change will bring a systemic change in the current arrangement of personalized power and in Moscow’s foreign policy? My answer to that would be – not necessarily! On the contrary, regime change could save the system by bringing the new savior into the Kremlin! This is a likely outcome considering contemporary Russia’s shift toward traditional values and archaic mentality, as well as the overall societal demoralization and lack of the liberal alternative.

What effect do you expect the Russia sanctions in general to have in shorter and longer terms?

The western sanctions (the Magnitsky sanctions, sanctions for Crimea occupation, for the Donbas war, for the meddling into the U.S. elections) have started to bite and have deepened the Russian recession, reducing the living standard and preventing economic modernization. One could also conclude that the sanctions regime has forced the Kremlin to become more cautious, and has pushed the Russian ruling team to refrain from its previously aggressive posture on the international arena. However, like any other sanctions regimes, so far, the sanctions applied to Russia have failed to force the Kremlin to fundamentally change its foreign policy. Domestically, the Russian respondents still say the Kremlin should not backtrack on in its policy, while the elite does not seem to be distancing from Vladimir Putin.

True, the continuation of the sanctions regime together with internal woes could eventually change their attitudes, but at the moment I do not see the unity of the West (especially in Europe) that would transform sanctions into a devastating weapon. To the contrary, the recent "Kremlin Report" that was viewed as a joke by many observers could only persuade the Russian establishment that the Trump administration is not serious in pursuing the sanctions regime. As a result, the Russian elite will continue trying to find loopholes in the Western restrictive measures (as it has been doing during the last years). True, there is certain logic that we still underestimate: the threat of sanctions could be more devastating than the real sanctions.

Do you expect Russia to make new aggressive political and/or military steps in its neighborhood in the near future?

The Kremlin policy is a result of unpredictable personal decisions based on one man’s moods and his understanding of weaknesses and strengths, as well as of his picture of the world. It is difficult to read through his mind, but the Kremlin’s modus operandi remains unchanged – wishing to make peace with the West while trying to bully the close neighborhood. The traditional Russian tactics of “escalation in order to deescalate,” or enforcing “friendship” continues to be on the agenda as well. Thus, we should be prepared for any eventuality.

In your opinion, are the present American and European policies to counter Russia’s foreign strategy robust enough? Should the United States and the European Union be doing more in this regard?

I do not believe in the effectiveness of “countering” Russia, especially when globalized economy allows deep integration of the Russian elite and Russian businesses into the West. Western institutions have indeed started toughening the rules, but this toughening could be easily avoided with the help of the western lobbyist organizations which are securing the interests of the Russian elite (and of the elites of China, Kazakhstan and other cleptocracies).

The new U.S. security doctrine and its nuclear posture allow to conclude that Washington D.C. is ready to ratchet up its military containment of Russia, which would demand from the Kremlin to enter the arms race, and eventually, ruin its economy. However, there are also signs that neither the United States, nor the “collective West” is ready to undertake steps to corner Moscow. There are also evident signs that the western establishment prefers not to provoke the Kremlin. The West hardly wants any regime change or system collapse in Russia – the nuclear state going down is hardly in any of the western plans. Thus, there are limits to the western deterrence policy.

It seems at the moment that the occupation of the Georgian territories by Russia has less attention of the international community than Russia’s actions in Ukraine. What, in your opinion, are the main reasons behind this tendency?

The West pays much less attention to Ukraine too. There are various reasons for that: the western society is preoccupied by its own problems, while the western establishment is tired of the puzzles that cannot be immediately solved. At the same time, the West does not want to provoke the Kremlin: Europe is not eager to engage in the conflict resolution process, and Trump’s America is not that interested in the region as well.