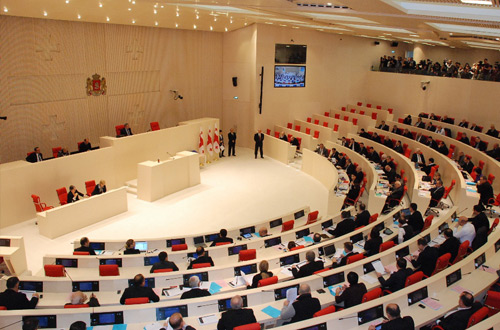 The resolution, which was given by the Georgian Dream parliamentary majority a standing ovation after the vote, was condemned by the UNM parliamentary minority as “shameful”.

Parliament adopted on December 5 with 77 votes to 14 a resolution recognizing 190 persons, arrested and convicted for various criminal charges under the previous government, as “political prisoners” and 25 others as being “in political exile”.

The resolution, which was given by the Georgian Dream parliamentary majority a standing ovation after the vote, was condemned by the UNM parliamentary minority as “shameful”.

The Parliament, according to the resolution, will now have to develop legal mechanisms through which those in the list should be exonerated.

It might be either through law on amnesty, which is currently under discussion in the Parliament, or through some other legal forms, according to Eka Beselia, a Georgian Dream lawmaker, who chairs the parliamentary committee for human rights.

MP Beselia was in the forefront of the process of compiling this list of 215 “political prisoners” and “political exiles”, which was done by a working group, established in early November at the parliamentary committee for human rights.

The working group included over dozen representatives from the non-governmental organizations. The commission’s work has been marred by controversy after two legal advocacy and human rights watchdog organizations, Georgian Young Lawyers’ Association (GYLA) and Article 42 of the Constitution, withdrew from it at very initial stage of the process. The two organizations said that the group set very tight deadlines for completing the work, which was not allowing a proper review of all the cases.

Despite of quitting the group, GYLA and Article 42 of the Constitution contributed to the process of compiling the list by providing the working group with their conclusions on up to 60 cases, which were studied by them as part of their regular legal advocacy work long before the commission was established.

In particular, GYLA tabled the list of 49 individuals, who were arrested amid street protest rallies in spring, 2011 on charges mainly related to illegal possession of weapons and drugs to resisting police. According to GYLA all these cases were handled by the authorities with lack of due process and without proper evidence to prove the guilt of persons involved, which was a reason to suggest that those arrests were politically motivated. GYLA also tabled a list of five other persons, whose cases where not related to 2011 protests, but whose arrests and subsequent convictions were also deemed by the group to be politically motivated.

Initially, the draft list, which was approved by the parliamentary committee for human rights on November 19, included total of 206 political prisoners and exiles. The list has changed since then by adding several names and in some cases by removing some of those persons who originally were included in the list.

The commission decided to strike out those seven persons, who were convicted in connection to series of explosions in Georgia in 2009-2010, including the one in the vicinity of the U.S. embassy in Tbilisi. The parliamentary committee for human rights said that this case required “additional and in-depth” examination.

The list of “political prisoners” includes those twenty persons, both former military servicemen and civilians, who were convicted into the case known as Mukhrovani mutiny in early May, 2009 amid opposition’s street protests.

The list also includes several persons who have been convicted for charges related to espionage in favor of Russia; among them is former diplomat and military analyst Vakhtang Maisaia, who was sentenced to 20 years in prison in January, 2010 during a trial proceeding behind the closed doors.

There are eleven persons in the list who were convicted into the so called Enveri espionage case in 2010.

The list also includes persons from an Orthodox group, who were convicted in connection to a fistfight in Tbilisi-based Kavkasia TV studio in 2010.

The list of persons who are now in exile after the previous authorities launched criminal proceedings against them includes several former officials former governor of Shida Kartli region Mikheil Kareli; as well as former head of forestry department Bidzina Giorgobiani; Badri Bitsadze, former head of border police, who is husband of ex-parliamentary speaker Nino Burjanadze; as well as businessman Kibar Khalvashi, who was a close associate of ex-defense minister Irakli Okruashvili. MP Beselia said those in this list of political exiles were granted asylum either by some EU-member states or the United States.

Okruashvili too was in this list, but his name was removed after the ex-defense minister returned from France, where he had an asylum. Okruashvili was arrested after his return to Georgia late last month and is now on trial for charges brought against him by the previous authorities.

The resolution, recognizing 215 persons as political prisoners and exiles, was strongly condemned by lawmakers from President Saakashvili’s United National Movement (UNM) party. The UNM lawmakers were particularly strongly against of including in the list those, who were convicted on espionage and military mutiny charges.

UNM MP Giorgi Kandelaki said this resolution was “a huge mistake” and dismissed the process as “a political stage show”.

“It will damage our statehood,” he said. “Release of these people, convicted for such grave crimes like espionage and mutiny, will be an act against the statehood… This is no way the list of political prisoners; it is an absurd list.”

UNM MP Chiora Taktakishvili said labeling those convicted for espionage in favor of Russia as “political prisoners is one of the most shameful decisions”.

UNM MP Akaki Minashvili said that such resolution was creating “a perception among criminals that if they are supporters of any political group, they may be exonerated, which in turn will also have negative consequences on crime situation.”

Georgian Dream MP Eka Beselia said that adopting of this resolution would set “a good precedent for any future governments in order to prevent them from politically motivated prosecutions.”

“I am very proud that this resolution has been adopted and by doing so we have washed off disgrace from our country,” MP Beselia said.