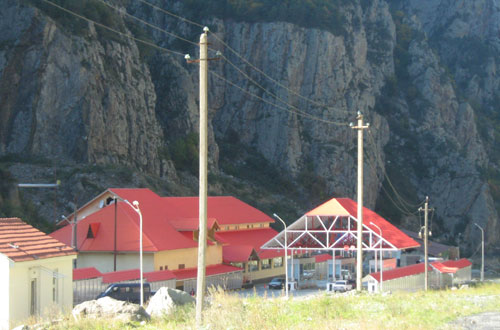 Zemo Larsi-Kazbegi border crossing point on the Georgian-Russian border will fall under one of the three “trade corridors” set to be established under the agreement. Photo: Tea Gularidze/Civil.ge

Russia-Georgia WTO deal will put in place sophisticated systems for cargo tracking and audit as part of an international monitoring of trade to be carried out by a neutral private company, which will be hired by Georgia and Russia and which will be accountable before Switzerland.

The package of deals, brokered by Swiss mediators, includes an agreement between Georgian and Russian governments “on the basic principles for a Mechanism of customs administration and monitoring of trade in goods”; the package also includes “Terms of Reference for the activity of the neutral private company” as defined by the Swiss mediators and a memorandum of understanding in which Switzerland confirms “to serve as a Neutral Third Party.”

The agreement, seen by Civil.ge, sets three trade corridors, two of which run through Georgia’s breakaway regions of Abkhazia and South Ossetia; representatives from yet to be selected private company will be present at the both ends of each corridor to monitor the trade.

Georgia and Russia will then separately contract selected company for the work it will have to perform in the respective countries and Switzerland will act as “a witness” in each case.

According to the agreement the company “will be accountable” to the Swiss side.

Private company will have no right to hire citizens of Russia or Georgia “for the main tasks of the implementation of this agreement, in particular onsite operations,” according to the terms of reference for the activity of a neutral private company as defined by the Swiss mediators.

Trade corridors are defined by their geographic coordinates and there is no mentioning of any name in the agreement in an attempt to keep a status-neutral approach. All the grid points of each trade corridor are defined according to Universal Transverse Mercator (UTM) coordinate system (for example UTM 37T 576170 E / 4817809 N).

Trade Corridor 1, which is on the Abkhaz direction, runs through a narrow strip all across the breakaway region’s shoreline.

This corridor 1 starts from the area close to Adler (which is within the Corridor 1), located in Russia’s Krasnodar Krai, in Sochi. The area is less than twenty kilometers away from the Abkhaz section of the Georgian-Russian border.

The corridor then runs through a main road traversing the Abkhaz shoreline and ends in Zugdidi, the main town of Samegrelo region close to the Abkhaz administrative border.

The same corridor also includes parts of the area on the sea, in particular off the coast of Gagra, Gudauta, as well as Sokhumi and Ochamchire ports.

Trade Corridor 2 – on the South Ossetian direction – is a zigzagged strip running through the mountain road, known as Transcaucasian Highway or Transkam, linking Russia’s North Ossetia with breakaway South Ossetia via Roki Tunnel.

This corridor 2 starts in the area close to the village of Nar (the village is inside the corridor) in Russia’s North Ossetia, roughly ten kilometers from the South Ossetian section of border, goes through Roki Tunnel and all along the Transkam road down to Tskhinvali and then continues further south to the main town of Georgia’s Shida Kartli region of Gori where it ends.

Trade Corridor 3 is located on the Zemo Larsi-Kazbegi border crossing point on the undisputed section of Georgia-Russia border, outside the breakaway regions.

EDES will serve as an electronic exchange platform through which Russian and Georgian customs services will have to share with private company information on “all customs and trade transactions”.

EDES will also incorporate advanced cargo information – a component that will be a web-based portal designed to ensure the advance submission of trade data, ahead of cargo’s arrival at a terminal, to a centralized database, accessible to a private company. This component is designed to allow a private company to carry out risk management prior to the entry of cargo into trade corridors.

“Terminal” is defined by the agreement as a point “located at the exit/entry of the trade corridors.” Agreement specifies that “the control and administration” of trade should take place at those terminals, meaning that representatives from a private company will be present at those terminals, outside the breakaway regions of Abkhazia and South Ossetia.

Georgia and Russia will have to provide a private company with standard set of data on all goods that enter or exit the trade corridors, among them detailed information about cargo, name and address of a consignee, country of export, country of origin and final destination of cargo, invoices, information on means of transport crossing the border.

This information in addition will also be sent on monthly basis by Georgia and Russia to the WTO’s Integrated Data Base, which will also be audited by a private company.

One of the elements of the International Monitoring System is “electronic seals on all cargo entering trade corridors at the terminals” and GPS/GPRS monitoring system for tracking the movement of cargo after its entry into the trade corridors.

It will be up to the contracting parties, i.e. Georgia and Russia, “to ensure that electronic seals are applied to” and GPS/GPRS-operated cargo tracking system is used for “each trade cargo” entering the trade corridors, according to the agreement.

It also says that “all information related to trade that enters or exits the trade corridors, including information obtained through electronic seals and GPS” will be sent by the Georgian and Russian sides to the private company.

“Based on this information, the neutral private company will perform risk management and audit the data,” the agreement says, adding that the company has to treat received data “in a strictly confidential manner.”

At the terminals representatives of a private company “shall monitor customs procedures and clearance by means of being present during checking of documentation and records, during physical examination of goods, re-examination, re-assessment and checking of suspicious cargo, and shall verify that electronic seals are put on cargo that enters the predefined trade corridors.”

After risk management analysis, a private company can recommend to Georgian and Russian customs officials to verify and check specific cargo at the terminals in the presence of a representative from a private company.

According to the agreement Russia and Georgia should establish working groups to address IT and legal issues arising from the need of implementation of the deal.

The terms of reference for operation of a private company, as defined by the Swiss mediators, specifies that it will be up to Georgia and Russia to set up any technical equipment required for putting into operation of the monitoring system, including the electronic data exchange.

Upon the entry into force of the agreement Russia, Georgia and the Third Neutral Party, Switzerland, will establish a Joint Committee, which will be in charge of supervising the implementation of the deal, as well as will be authorized to address possible disputes between the parties.

If Russia and Georgia fail to resolve a possible dispute through the Joint Committee mechanism within a month, according to the agreement, the case can go to international arbitration in accordance with the Permanent Court of Arbitration Optional Rules for Arbitrating Disputes between Two States. The arbitration’s ruling should be final and binding, according to the agreement.

While being accountable before Switzerland, the private company will also have to “regularly report all its findings” to the Joint Committee.

According to the agreement both Georgia and Russia will have to “regularly invite” Swiss representatives “to make on-site visits” at their respective terminals in order “to discuss lessons learned and best practices based on recommendations of the neutral private company.”

The agreement, which will go into force upon Russia’s accession to WTO, will be reviewed every three years and may at any time be amended by mutual consent between Georgia and Russia.