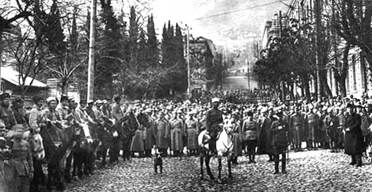 The Georgian Parliament declared February 25 – the day when 89 years ago Bolshevik’s Red Army took over Tbilisi – as the Day of Soviet Occupation.

The resolution, endorsed unanimously by the Parliament on July 21, instructs the government to organize various memorial events on every February 25 and to fly national flag half-mast to commemorate, as the decision puts it, hundreds of thousands of victims of political repressions of Communist occupational regime.

In a separate resolution, also passed unanimously on July 21, the Georgian Parliament declared August 23 the Day of Memory of Victims of Totalitarian Regimes.

The decision echoes declaration of the European Parliament on the proclamation of 23 August as European Day of Remembrance for Victims of Stalinism and Nazism. On that day in 1939, Germany and the Soviet Union signed a treaty – known as Molotov-Ribbentrop Pact – that divided Eastern Europe between the two countries.

“Although by 1939 Georgia had been occupied [by the Soviet Union] for already 18 years, dividing Europe into spheres of influence prolonged Georgia’s presence in the Soviet Union,” the Georgian Parliament’s decision reads.