BLAST FROM THE PAST Schadenfreude reigned as four opposition MPs have been lured to sit in Georgia’s ill-fated 10th convocation of the parliament. All of them are the so-called “business component” (a euphemism for corporate sponsors) on the nativist Alliance of Patriots. The Alliance, known for its pronounced anti-Western tilt, is formally boycotting the parliament, alongside other opposition parties. But the plucky four did take the plunge. Evil tongues say that those four businessmen were seconded – willingly or otherwise – from Georgia’s uber-businessmen, one Bidzina Ivanishvili, to bankroll the Alliance. Seen in this light, their regaining of the home harbor seems quite natural.

But what is Georgian political drama without a dash of absurd, the very same mix of the hilarious and tragic that made the trademark Georgian cinematography thrive?! The four silver-maned men said they are to establish a new political movement, titled, wait for it… The European Socialists. Socialists, Karl (Marx)! We can only assume, that failing to change the nationalist right-wing Alliance from within, these latter-day Trotskites rejoined the Georgian Dream – itself a proud member of the Party of the Europan Socialists.  At least GD’s Irakli Kobakhidze rejoiced – he said the healthy part of the Alliance went into the parliament while the “Russian component” stayed out.  Curious, that that the very same members of the Alliance spearheaded pro-government rallies when the going got tough for the ruling party in 2019 and in 2018.

KNIGHTLY HONORS Georgians love to quote Mark 6:4, that prophet is without honor only in his own country. It is so written. The December 31 decree of the French President Emmanuel Macron, conferred the rank of Chevalier de la Légion d’honneur to the ruling party patron Bidzina – somewhat cryptically – for his “40 years of service.”

It is not exactly known for what merits Mr. Ivanishvili, once a French citizen himself, deserved the honor, but his longtime philanthropic activities are our best guess. This is not the first time Ivanishvili gets rewarded for his charitable contributions: Georgians had once granted him the rule over the entire country and – some argue – he continues to do so to this day.  Recognition from the West, however, is a special honor, especially when the opposition accuses you of being pro-Russian on such feeble grounds as getting your billions in Russia. In a gesture that came off as a tad patronizing, President Salome Zurabishvili, Chevalier herself, has joyfully welcomed Ivanishvili to the club. Madame la Présidente can be magnanimous, as still has one up: she is also an Officier de l’ordre national du Mérite – Frances more restrained, and more merit-based circle of top honors.

BLACK SWAN Not too long after Grigol Vashadze, former Soviet Diplomat and ex-Foreign Minister of Georgia, abruptly quit his position as the chairman of the United National Movement party, it started to show where he might be going next. His famous wife, Georgian prima-ballerina Nino Ananiashvili has just announced she’ll be heading the Novosibirsk ballet company in Russia. In her interview with the RFE/RL Tbilisi service, Ananiashvili said she was expecting the backlash Georgian artists habitually face whenever they head north. Explaining her decision, she cited the crisis in the art field brought by the pandemic. Ananiashvili said this was the only foreign-offered position that would allow her to retain the current position as an artistic director of Georgian State Ballet and explained her husband and her keep art and politics apart. Incidentally, the motto of the Novosibirsk troupe is apparently “We Make the Sublime Open”.

HELPING HAND Firefighters have been struggling for days to put out the forest fires in the Gali district in Abkhazia, as several other blazes have emerged across the occupied region. Abkhaz authorities claimed they managed to quell fires, but locals report that the fires are still raging, leaving several homes in ashes and dozens of families displaced. Tbilisi authorities said they have offered assistance twice already, but did not comment on how and whether Sokhumi responded. Meanwhile, the fires have spread in Tbilisi-controlled territory as well, but nobody is in immediate danger, the authorities claim.

*We take a Christmas break and will be back on January 11. Happy holidays to those who celebrate today! 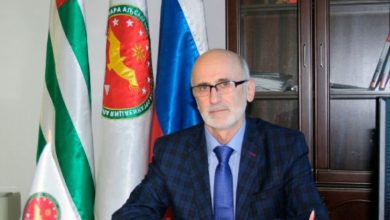