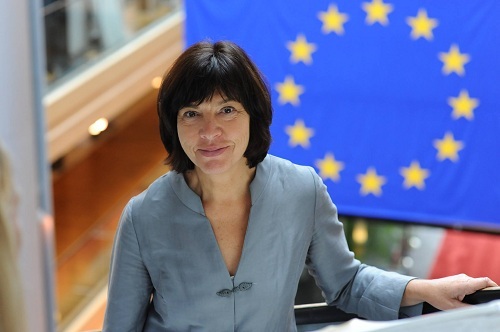 In Tbilisi, MEP Harms held meetings with Prime Minister Giorgi Kvirikashvili, Foreign Minister Mikheil Janelidze, Reconciliation Minister Ketevan Tsikhelashvili, MPs from the ruling party and the opposition, as well as the Public Defender and a number of representatives of Georgian civil society organizations.

Last week you were in Tbilisi for Euronest PA committee meetings. Could you tell us briefly on the agenda of your meetings?

During the committee meetings of the Euronest Parliamentary Assembly we discussed the following topics: security challenges, energy efficiency development and energy sustainability, as well as enhancing social security of employees in the European Union and the Eastern Partnership countries.

The main interest was to get a better understanding of the differences and parallels in the development, and of the challenges and problems our partner countries are facing, in order to find out how to best support each other.

In a joint working group, parliamentarians from associated countries and Members of the European Parliament discussed how to work on a better implementation of the association agreements and overcome obstacles.

On February 15, on the last day of your visit to Georgia, you met with Mustafa Emre Çabuk in prison. Çabuk, a Turkish citizen, who has been working as a teacher at Demirel College in Georgia, had been held in pre-extradition detention for more than half a year and was under the imminent threat of being extradited to Turkey due to his alleged links to the Gülen movement. What is your take on the case and what do you think the Georgian authorities should do regarding the extradition request?

With the support of the Georgian authorities I have visited Mustafa for the second time in prison. Yesterday’s news that he has been released on bail from prison was a great joy and relief to me. I already spoke to him on the phone. It made me very happy to listen to him, to hear that he is with his family. I could also hear all his students’ and colleagues’ voices in the background, and I am very happy for him that he can now enjoy his freedom. After many talks with parents of his former pupils, I am convinced that he loves his work and gave good education to many Georgian children. I cannot understand why a man like him is accused of being a terrorist or a supporter of violence.

Now we are still anxiously waiting for the final decision about his extradition to Turkey. What I know for sure is that if the Georgian court decides to extradite him to Turkey, he will be jailed like tens of thousands before him since 2016. And like tens of thousands already jailed in Turkey, he will have no chance of a fair trial. This is clearly a reason to give him protection in Georgia – a country he has served for 15 years. Many colleagues in the European Parliament and in the Georgian Parliament share this position. I am confident, and I trust that the Georgian authorities and the Georgian court are aware of the fact that right now there is no rule of law in Turkey, and I keep my fingers crossed that Mustafa and his family will be safe in Georgia also on the long term.

I very much understand that Georgia needs to have functioning relations with Turkey. In the case of Mustafa, I think that Georgia has to have a principled stance on rule of law, human rights and values.

The alleged abduction and the subsequent imprisonment of Azerbaijani journalist Afgan Mukhtarli caused a serious public outcry in Georgia. What is your understanding of the incident and your assessment of the Georgian government’s reaction to it?

Afgan Mukhtarli’s abduction is a grave and scandalous case of violation of rule of law and human rights. In the European Parliament we could not believe that something like this happened in the center of Tbilisi. Afgan Mukhtarli would not have been imprisoned in Azerbaijan without this criminal action in Georgia. My colleagues in the European Parliament and I are convinced that a transparent and thorough investigation into this case is needed.

The evening before I left, we had a public debate in Tbilisi with my colleagues from the Georgian Parliament – Tamar Khulordava and Sergi Kapanadze – representing the ruling party and the opposition, respectively. I appreciate a lot that both agreed that an inquiry commission in the Parliament is the best way to proceed with the investigation and complete clarification of the case.

The European Commission said in its December report that Georgia continues fulfilling the visa liberalization benchmarks, but “further improvement of the implementation is expected.” At the same time, we have heard reports that some member states are concerned by the rising number of Georgian asylum seekers. Could you tell us where we stand on the matter? Do you think this could trigger the application of the suspension mechanism?

Of course, criminal activities cannot be tolerated, but I will do my utmost to defend the visa-free regime for Georgian citizens. We need more contacts, more meetings, more exchange between people in Georgia and people in the member states of the European Union. And visa liberalization is a cornerstone for sustainable and robust relations.